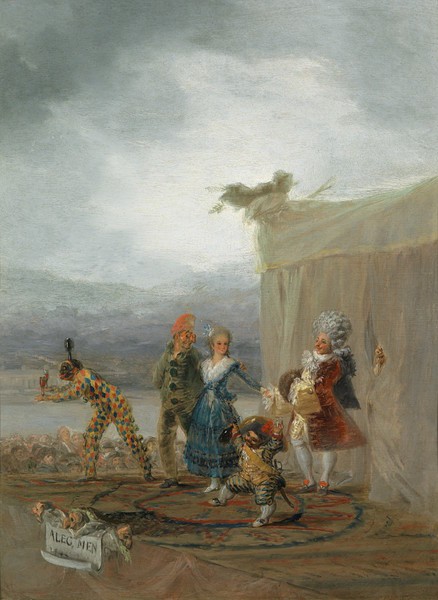 This canvas belonged to the collection of the Count of Adanero and was inherited by his brother, the Marquis of Castro-Serna. It then belonged to his son, the Viscount of Roda, then to the Marquis of San Clemente and finally to Ramón Jordán de Urries, who in 1962 sold it for the sum of two million pesetas to the National Ministry for Education, which bought it for the Prado Museum.

In 1792 Goya left Madrid to spend some time at the Cádiz residence of his friend and ilustrado Sebastián Martínez. He stayed there whilst recovering from an unknown illness which left him permanently deaf.

Whilst there, and until his recovery in 1793, Goya worked on a number of small-format paintings which were later presented, in January 1794, before the Royal Academy of Fine Arts of San Fernando in Madrid.

Goya gave these small works, painted on tinplate, the name of National Pastimes (Diversiones nacionales) (Bulls in the Meadow, The Roped Bull, Banderillas in the Country, Clearing the Bullring, Passes with the Cape,Goring of the Picador, Matador Killing the Bull, Dragging Away the Bull). Since they were not made for any commission, they became an exercise in free expression for the artist. Goya made reference to this series of works in two letters he sent to Bernardo de Iriarte, Vice-Protector of the Royal Academy in Madrid, in which he also expressed his gratitude to Iriarte for the interest he had shown in ensuring Goya's works were favourably received at that institution. About these paintings he said the following: "I have been able to make observations which do not often occur in commissioned works, in which caprice and invention are limited".

All of these works are painted in oil on thin sheets of tinplate, and all have more or less the same dimensions. These sheets of tinplate were coated with a pinkish primer over the top of a darker, reddish ground, which shows through in certain areas which Goya has left uncovered. Here we can see how he first sketched out the design in pencil, traces of which are still clearly visible.

In the centre of the painting stands a stage covered by a carpet and a tent tied to the branchless stump of a tree. In the background, low down, are the spectators. The protagonists of the scene are taken from the Italian Commedia dell'Arte tradition. The various players represent the comical servant Colombina, Pierrot or Piedrolino, and the bourgeois Pantalone, shown wearing a striking white wig. To the left of these three, we see Harlequin addressing the crowd and balancing three cups, which symbolize the instability of the amorous relationship between the other characters. Also in the centre of the composition is a dwarf, who is dancing and holding aloft a bottle of wine and a glass.

This painting has been interpreted as a veiled allusion to the love triangle that existed between Manuel Godoy, María Luisa de Parma and Charles IV. Tomlinson believes that it was the rumours about the relationship between the queen and Godoy, which became particularly intense in the course of 1793, which suggested some of the symbolic content of this painting to Goya. However, she points out that these insinuations do not constitute the fundamental subject matter of the work but simply serve to create an enriching sense of ambiguity.

In the foreground, below three masks, there is a poster which reads "Aleg. Men.", thought to be a reference to the allegories of Menander (Athens, 342 BC-Athens, 292 BC), a Greek dramatist and author of satirical and moralistic comedies. This is most likely the source of the alternative title by which the painting is often known.

Manuela Mena and Julie Wilson-Bareau point out the similarities between the masks seen here, both those on top of the poster and the one which is shown peeking out of the tent opening, and those that appear on page 28r of Goya's Italian Sketchbook.