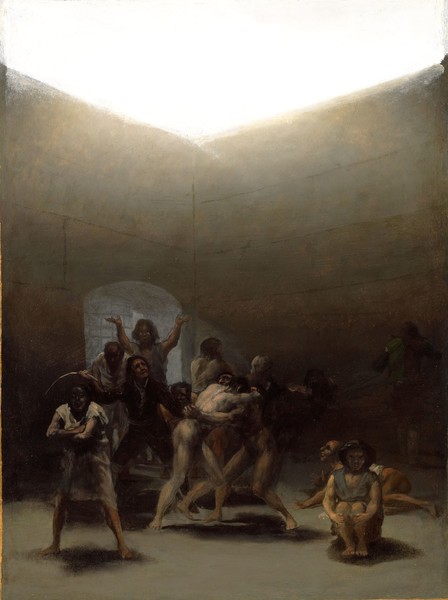 This work belonged to the Count of Quinto, who sold it in 1862. It subsequently belonged to a number of different collections, including those of: E.G. de Knyff, Edmond Picard, in Brussels, and a private collection in Paris.

It was finally bought by Algur H. Meadows who donated it to the American museum which has housed it since 1967.

This painting was identified in 1967 thanks to a description of it that appears in a letter which Goya sent to Bernardo de Iriarte on 7 January 1794: "(...) a yard with lunatics, in which two nude men are fighting whilst a warden beats them, and others dressed in sacks: (it is a scene that I witnessed in Zaragoza)". This is one of the works that Goya painted during his stay in Cádiz, spent at the home of his friend and ilustrado Sebastián Martínez, Bulls in the Meadow.

In a yard with no roof, possibly in a ward at the hospital of Nuestra Señora Gracia in Zaragoza, Goya has painted a group of mental patients. In the centre of the composition, two naked men are fighting as if they were a pair of Graeco-Roman wrestlers and look like something out of a classical painting or sculpture, whilst the carer or warden flogs them with a whip. Other men, dressed in the worn white tunics which Goya calls "sacks" in his letter, cheer them on. A figure on the left-hand side, standing with his arms crossed, looks straight out at the viewer with an expression of horror on his face, whilst the man wearing a hat, sitting on the ground to the right, jeers out at us. On the right-hand side, standing facing the wall, another figure wears the green and brown uniform given to less conflictive patients.

The bright light flooding in through the open roof and the barred window at the back of the scene blurs the outlines, resulting in an indistinct impression of the space and erasing the corner where the two walls of the yard meet. This gloomy, vague space in which the mental patients are held appears to be an allusion to the situation of these men, and to the confusion and chaos of their diminished capacity to understand or reason.

Goya here provides a glimpse into the deplorable conditions in which the mentally ill were forced to live, conditions which he himself tells us he witnessed first-hand. This work also deals with the subject of madness and irrationality, topics which he may have been drawn to following the loss of his hearing and which would go on to be of interest to the romantic painters, as we can see in works like The Madwoman (1822-1828, Musée des Beaux-Arts, Lyon), by Théodore Géricault (Rouen, 1791-Paris, 1821).