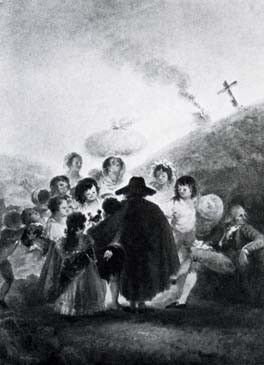 This work was sold at the Hôtel Drouot auction house in Paris on 2 April 1895. It was exhibited at the Mauritshuis in The Hague and at the Musée du Louvre in Paris in 1970.

Mayer, Desparmet Fitz-Gerald and Gassier-Wilson, among others, believe it to be an autograph work by Goya.

There do remain some doubts regarding its authorship and its date, however.

The fact that this painting is painted in oil on tinplate suggests that it could have been made around the same time as the small works that Goya painted during his stay in Cádiz, when he was recovering from an illness which he possibly contracted in Seville.

In the centre of the scene, which is set outdoors, stands a figure wearing a black cape and hat, with his back to the viewer. This is the puppet vendor, an enigmatic character, around whom a crowd of people of different ages has formed. One of them, on the right-hand side, has made himself comfortable and sat down.