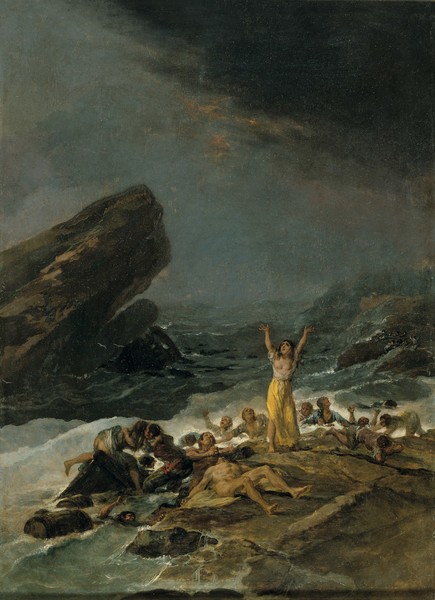 A Shipwreck is one of the works that Goya painted during his stay in Cádiz. In these paintings he was able to give free rein to his creativity, liberated from the demands which commissioned works entailed (see rec. no.).

In the background of the picture we can make out the hull of a boat smashed against the rocks by the storm that we see moving away in the form of a black storm cloud. In its wake it has left several wounded men and women, who are desperately clinging on to the rocks in the foreground. In the centre of the scene a bare-breasted woman raises her arms to heaven and cries out for help, as if in prayer. Here, however, the human figures occupy a distant second place, dwarfed by the imposing presence of the furious, uncontrollable forces of nature.

It is likely that Goya took his inspiration for these ragged, semi-naked figures from works of antiquity, from the tombs and classical fountains that he would have seen in Madrid. He may even have used the drawing on page 31a of his Italian Sketchbook, in which we see Abel being brutally murdered by his brother Cain, and adopting a posture which is reminiscent of the body stretched out on the rock here in A Shipwreck.

Despite the small dimensions of this work, Goya has been able to condense here the pain and desolation caused by such a disaster. We do not know whether this is a depiction of a real event which the painter had heard about or if was dealing with this theme more generically, meaning that the elements in this scene could be extrapolated out to apply to other, similar disasters.

Thanks to the widespread interest in Edmund Burke's theory on the sublime (A Philosophical Enquiry into the Origin of Our Ideas of the Sublime and Beautiful, 1757), the last third of the 18th century saw an interesting shift in the way natural disasters were treated in art. Following the publication of Burke's treatise, disasters became part of the aesthetic category of the sublime as events which transcend our senses and generate within us a mixture of both terror and fascination. It is possible that Goya based this work on Burke's writings, which he could have discovered during the time he spent at the home of his friend Sebastián Martínez, who was very involved with the world of English culture.

It is also likely that, during his trip to Italy, Goya would have seen paintings by Claude Joseph Vernet (Avignon, 1714- Paris, 1789), who devoted much of his artistic career to representing shipwrecks.