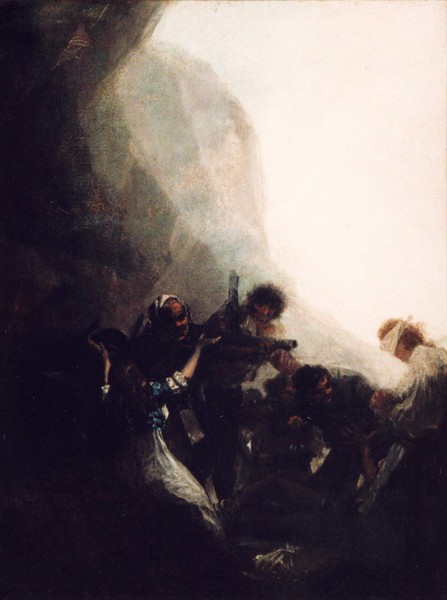 This work can be directly related to two others in the series belonging to the Marquis of La Romana: Bandit Stripping a Woman and Bandit Murdering a Woman.

A group of bandits are shown killing some men they have attacked on their way along a highway. In the midst of much confusion, an elegantly dressed woman flings her arms in the air and begs for mercy whilst on the right-hand side of the composition a man with a blindfold over his eyes and wearing a white shirt awaits his execution at the hands of the man in the centre, who is taking aim with a gun. The rest of the attackers, armed with pistols, threaten a man lying on the ground.

Goya has painted this work using delicate, thin layers of colour, applied in transparent washes, picked out with small touches of thick paint and outlines drawn in black. This way of working recalls the technique used in the drawings found in the Madrid Album, or Album B, made between 1796 and 1797.

There exists a replica of this painting which belonged to Eissier in Vienna. It was exhibited in the Austrian capital in 1908, listed as coming from the Madrid collection of La Romana.

In this work, Goya has depicted a scene of banditry, a threat which anyone travelling at the time would have been all too aware of. This same subject matter is also dealt with in Stagecoach Hijacking, Bandits' Raid and in the series Capture of the Bandit El Maragato. Although the Aragonese artist tackles the theme realistically in these others works, none of them have the same directness and veracity of Bandits Shooting their Prisoners.