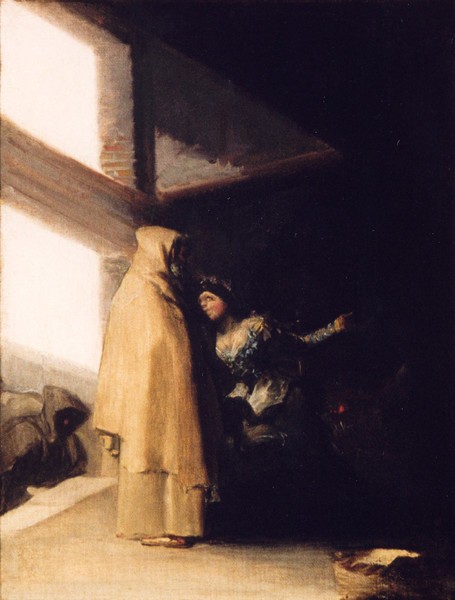 Between 1808 and 1812, Goya painted a series of eleven canvases of which eight have survived past the second half of the 19th century. These paintings appear in the inventory carried out in Palma de Mallorca following the death of Pedro Caro, III Marquis of La Romana. In the notary's documents they are described as follows: "eleven small paintings in golden frames depicting caprices by Goya". The fact that these works vary in size and address diverse themes suggests that they were not made as part of a commission.

This particular painting and the next in the series, Interior of a Prison, are related to the case known as the "Crime of Castillo's wife". This is the name by which the story of 32-year-old María Vicenta Mendieta was known. She helped her lover, a younger cousin of hers named Santiago San Juan, to murder her husband, Francisco del Castillo. Goya must have been privy to all of the details of the trial, which took place in February 1798, since his friend Juan Meléndez Valdés (Ribera del Fresno, 1754-Montpellier, 1817) was named prosecutor for the case at precisely the same time that Gaspar Melchor de Jovellanos (Gijón, 1744-Puerto de Vega, 1811) was Minister for Grace and Justice. María Vicenta Mendieta and her lover were executed for the crime on 23 April 1798 in Madrid's Plaza Mayor, as reported in the daily newspaper El diario de Madrid.

This painting shows the moment just before the murder took place. María Vicenta, elegantly dressed and accompanied by her maids, receives a visit from a man dressed as a monk, who is actually her lover. The viewer can only make out a tiny portion of his face, seen in profile. The woman is pointing to where her unsuspecting husband, Francisco del Castillo, can be found. It is thought that, shortly before, María Vicenta had given her husband a "serum" to drink. Once this had taken effect, the cousin stabbed him.

The light, entering through the large windows on the left-hand side, illuminates the two main protagonists, with the figure of the husband left in the dark, lying on a bed. This same light reveals to us the face of the woman, who is looking up at the murderer with a mixture of complicity and supplication on her face, and her hand, which is pointing towards her husband further back inside the room.

Behind the cousin dressed as a monk, and wearing the same hooded cloak, there appear more figures, perhaps accomplices who knew what was about to happen.

This work can be related to Caprice no. 3, entitled Here comes the bogeyman. In that etching, a woman and her two children receive a visit from her lover, disguised as a monk.