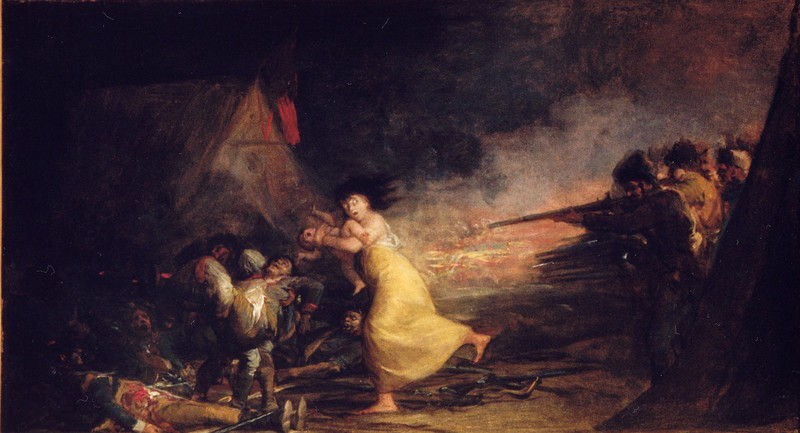 Due to its dimensions and to the use of an orange-coloured preparation on the canvas, this work can be connected to Gypsy Cave and Interior of a Hospital.

This scene takes place at night inside a military camp. On the left-hand side stands a red tent, adorned with standards and banners. On the ground are a number of dead soldiers wearing blue coats with red and white cuffs and ochre-coloured trousers, telling us that they belong to one of the Spanish regiments active during the Spanish War of Independence. Running towards them is a group of civilians, modestly dressed commoners. Two of them are carrying a wounded man and, slightly further behind, a woman dressed in yellow, drawing our gaze into the centre of the composition, is clinging on to her naked child. With an expression of horror on her face, she is turning her head to look back at the platoon of soldiers behind her, just as they open fire. These other soldiers are part of a foreign army, probably belonging to the forces of Napoleon.

The only source of light in the painting is the flashes of the rifle shots, a detail which further heightens the drama of the scene. The group of civilians was probably trying to find shelter in the Spanish camp, which had been taken by surprise by the French soldiers, who show no mercy to these innocent people, either.

Just as occurs in Third of May, the executioners do not show their faces and have their backs turned to the viewer. This is a device that Goya also used in some of the etchings in the Disasters of War series (no. 2, With or without reason, and no. 32, Why?, for example).

Similarly, the woman who is trying to protect her child connects this work to another of the etchings in this same series, no. 4, entitled I saw this.