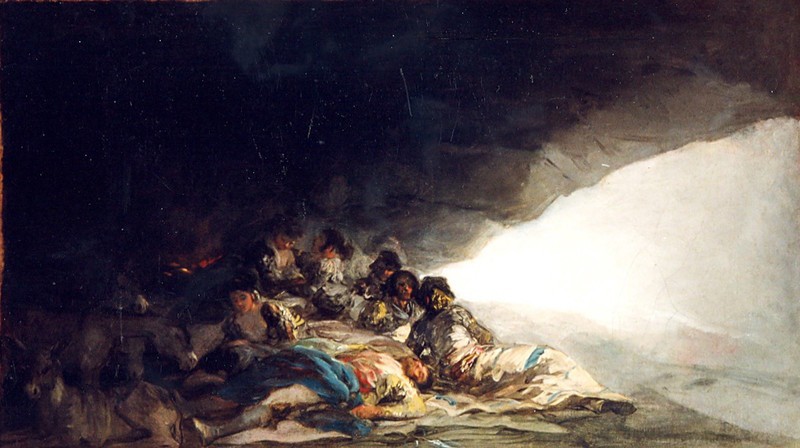 Due to its dimensions and to the use of an orange-coloured preparation on the canvas, this work can be connected to Interior of a Hospital and Shootings in a Military Camp.

In this picture we see a group of people taking shelter and talking inside a cave, where they have lit a fire to keep warm. On the left-hand side of the composition some donkeys are resting and we can see some shearing scissors and pincers for removing horseshoes, in allusion to the profession of these men, who are perhaps cattle dealers. Going by the clothes they are wearing, the men appear to be gypsies, whilst the women, well but somewhat extravagantly dressed, could be prostitutes.

Goya has painted two light sources, which illuminate the lower half of the canvas. The first of them is the natural light streaming in through the mouth of the cave. The second source of light is the fire, so weak that it appears to be going out, located right at the back of the cave.

Goya has built up the figures using light brushstrokes, most visible in the colourful clothes worn by the women. The dark colour of the rock contrasts with the white, thickly applied impasto brushstrokes used to render the light.