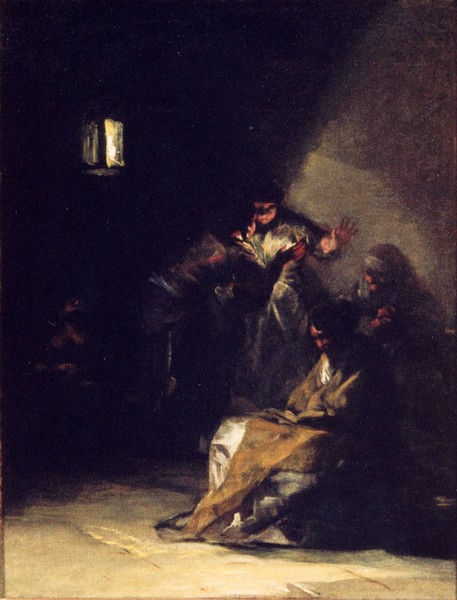 This canvas continues the narrative which began in The Monk's Visit. María Vicenta Mendieta, after being put on trial for the murder of her husband, was jailed and later executed. Nobody was moved by her mother pleading for a more lenient sentence since the killer was a woman. The prison in which María Vicenta Mendieta was held was used for those criminals found guilty of the most atrocious of crimes. In these places the prisoners were kept completely cut off from the outside world, in rooms full of bugs and without even a bed to sleep on.

Here we see the woman sitting, accompanied by her maids. She is looking down at the floor, her face clearly betraying her worry. The only flicker of light in the room comes from the little lantern hanging from the ceiling, which is scarcely able to illuminate the scene. This darkness and the fragility of the light could allude to the all but hopeless situation of the condemned woman.

This work has been related to Caprice no. 32, Because she was susceptible, which features a lone woman sitting on the floor of a prison cell, her head tilted to the side, her only company a rat. There also exists a preparatory drawing for this etching, with the same title as the final print (Prado Museum, Madrid).