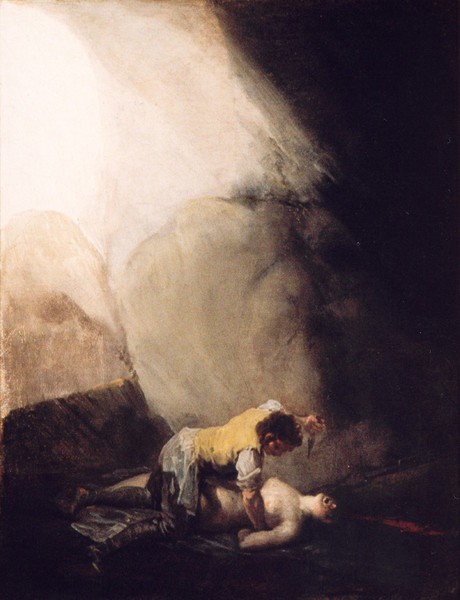 This work forms part of a set of three paintings within the series belonging to the Marquis of La Romana, which also includes Bandits Shooting their Prisoners and Bandit Stripping a Woman.

In the middle of a remote, rocky landscape, inside a cave perhaps, one of the bandits responsible for the attack on the coach in Bandits Shooting their Prisoners is about to finish off a woman with his knife. The man holds the wounded woman from behind as she lies on the ground. We can already see a trickle of blood coming from her body. She opens her mouth to cry out whilst the man concentrates all of his attention on finishing what he has started, displaying no mercy whatsoever.

The light is rendered using very thick strokes of greys and whites, whilst the figures display some more delicate brushwork. According to Manuela Mena and Juliet Wilson-Bareau, the fine black brushstrokes serve to pick out the outlines of the figures in the shadows, emphasizing the stomach and lower body of the man in particular. The two writers thus suggest a parallel between this work and one of the more violent images in the Caprices series of etchings: no. 8, They carried her off!.