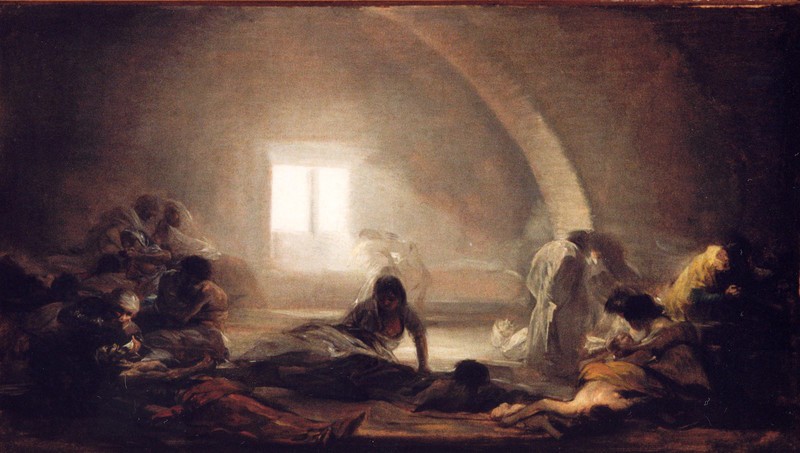 Due to its dimensions and to the use of an orange-coloured preparation on the canvas, this work can be connected to Vagabonds Resting in a Cave and Shootings in a Military Camp.

Set in a hospital room containing a number of large arched structures, this scene shows a group of people suffering the terrible effects of a plague epidemic.

A golden light illuminates the space and reveals the distressing situation within, as some of the sick try to help the most seriously ill and even the dying, giving them medicine to drink. They go about their work despite the pestilent atmosphere, which in some cases forces them to hold their noses with their fingers. This gesture is repeated in the figure walking through the macabre landscape of corpses in etching no. 62, The beds of death, of the Disasters of War series.

Here, the figures are painted using rapid, fine brushstrokes and their faces are treated only superficially, in many cases giving them a phantasmagorical aspect which portends the approach of death. The atmosphere evoked by Goya in this painting is reminiscent of two of the works which the artist made during his stay in Cádiz: Yard with Lunatics and Interior of a Prison.

This work can also be related to some of the images in the Disasters of War series especially numbers 48 to 64. In these etchings, Goya captured scenes of solidarity among those suffering the terrible consequences of war such as hunger and sickness. Their haggard, skeletal faces reflect the widespread suffering, and, just as in Plague Hospital, leave little room for hope.

The same physical fragility of many of the people in the painting can also be see in the figure of the resurrected man in The Miracle of San Antonio of Padua, in the chapel of San Antonio de la Florida (1798, Madrid).