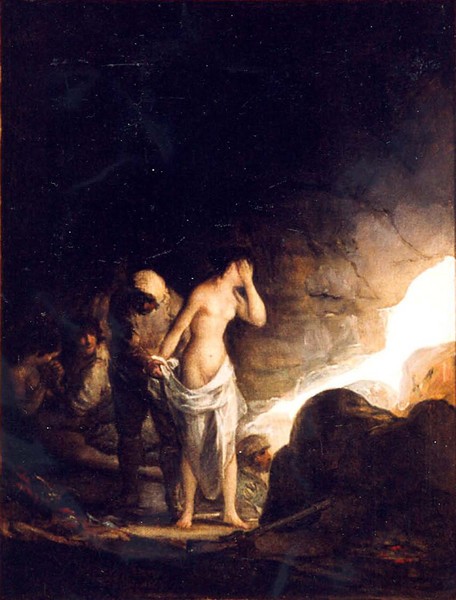 Three of the eight paintings in this series are closely related to one another, depicting as they do a series of events: Bandits Shooting their Prisoners, Bandit Stripping a Woman and Bandit Murdering a Woman.

In the centre of the composition, a woman is being stripped of her clothes by a man. She is concealing her face with one hand whilst turning away from the viewer. On the left-hand side of the canvas a second man has done the same to another woman, who is already completely naked and is clasping her hands together, probably pleading for mercy. Meanwhile, another bandit, largely hidden from view, keeps watch in the entrance to the cave in which the scene is set.

Goya has depicted this space through the use of broad brushstrokes. The light floods in violently from the right-hand side, illuminating the half-naked body of the standing woman, perhaps in an attempt to emphasize her innocence. The light reveals her with the same aggressiveness with which the bandit is pulling off her clothes.

This work reflects the climate that predominated in Spain during the Spanish War of Independence. It depicts an episode of violence committed against women, an issue which Goya also tackled in some of the images in the Disasters of War series of etchings (no. 9, They don't want to, no. 11, Nor these, and no. 13, Bitter presence, for example).