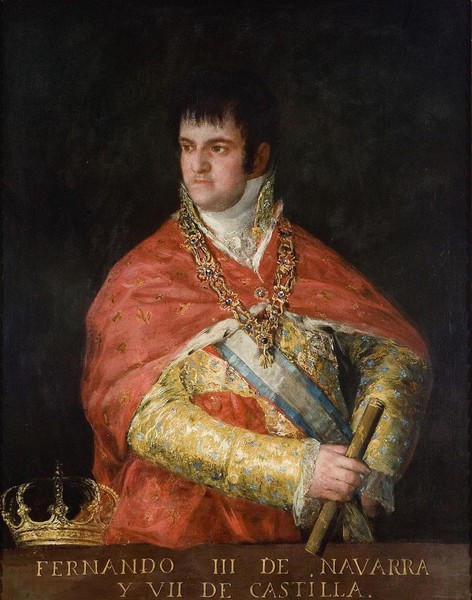 This work was made following Ferdinand VII's return to Spain from France, where he had been imprisoned once Joseph Bonaparte was named King of Spain. On 20 June 1814, the Regional Government of Navarre commissioned Goya to paint this portrait. The artist completed the task in just twelve days, and received two thousand reales as payment. This may be the first portrait that Goya made of the monarch after his return to Spain.

Ferdinand VII (San Lorenzo de El Escorial, 1784-Madrid, 1833) was proclaimed King of Spain in 1808, although soon afterwards he was forced into exile by the Napoleonic invasion. After the expulsion of Joseph Bonaparte, he reined once again, from 1814 up until his death. His reign was characterised by a return to absolutism and the persecution of liberals and afrancesados, or supporters of the French.

To execute this painting, Goya made use of the life studies that he had made for the portrait of Ferdinand VII on horseback, painted in 1808.

This half-length portrait depicts the monarch seated in front of a neutral background, accompanied by the symbols of his power: the royal crown, the baton adorned with castles and lions, and the robes of state, lined with ermine fur and held in place by a single button, over the top of which the necklace of the Order of the Golden Fleece hangs, with the blue and white sash of the Order of Charles III visible underneath.

The king has his head turned to the right, and the somewhat lost look upon his face gives him an absent, distracted appearance. According to some scholars of Goya's work, the artist was no great admirer of this monarch, for which reason he tended to represent him as an unpleasant, arrogant character.

This portrait has undergone several interventions, resulting in damage to the quality of the painting. It was relined, the background painted black, and the inscription that we see today at the bottom of the canvas was added.