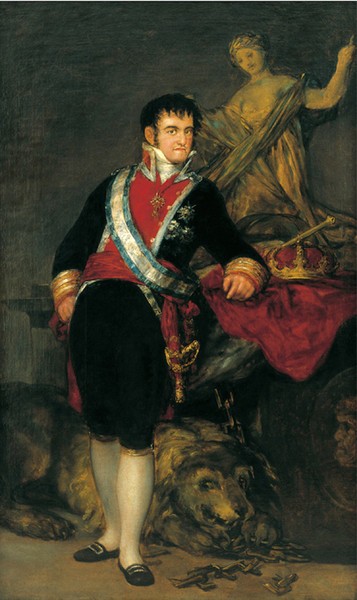 Following Ferdinand VII's period of captivity in Valençay (France), the Municipal Council of Santander decided to commission Goya to paint a portrait of the monarch, to be hung in the town hall.

The council gave the following specifications for the portrait: "The painting must be seven feet tall and of proportional width. The portrait must be full-length and frontal; in the dress of Colonel of the Guard and with the royal insignia. He should have one hand resting on the pedestal of a statue of Spain, crowned with a laurel wreath, and on this pedestal must be the sceptre, the crown and the robe: at its base, a lion with broken chains in its claws. The work on the head must be very carefully done and a close likeness is desired". The artist was also requested to complete the work as quickly as possible, to which Goya responded that he would need at least fifteen days, charging for the job 8,000 reales, which would have been paid once work had finished. He signed a receipt for this very amount on 1 December 1814.

Until the death of the king, this painting remained on display in the meeting room of Santander city hall. It was later forgotten for a time until it entered the collection of the municipal fine art museum.

This portrait depicts Ferdinand VII wearing several medals and honours, including the blue and white sash of the Order of Charles III, and the large insignia of the Order of the Golden Fleece that hangs around his neck.In the background we see a statue on top of a pedestal.

This is the allegory of Spain, wearing a laurel wreath and baring her breasts. When the painting was made, she would have been crowing the king with her right hand. According to Salvador Carretero, she symbolizes the constitutional mother of the Spanish people. However, in view of the events occurring in Spain following the arrival of the monarch (the abolition of the Constitution of 1812, the restoration of the Inquisition, etc.) and which resulted in the crushing of the liberal regime, Goya made some changes to this portrait, including the removal of Ferdinand VII's laurel wreath. The figure of the lion at the king's feet would have symbolized the liberation of the Spanish people with the expulsion of the French troops.

The king is resting his left arm on the ermine-lined robes of state, on top of which sit the crown and the baton, the symbols of his royal power.The vividness of the colours, especially the red of the king's waistcoat and the ermine robe, are particularly striking and lend the painting a luminous feeling. As in so many of Goya's portraits, the brushstrokes are thickly applied.

The painting was restored in 1947.