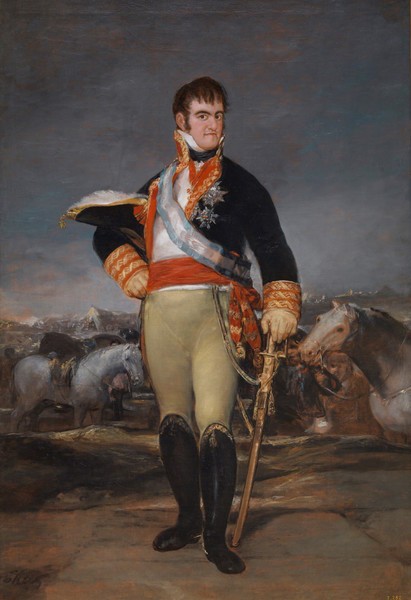 This portrait was commissioned by the Madrid School of Civil Engineering through Francisco Javier Mariátegui, head architect for Madrid City Council and Captain of the Royal Civil Engineers Corps. By Royal Order of 14 May 1869 it was sent from said school to the Museum of La Trinidad, and in 1872 it became the property of the Prado Museum.

The model for this portrait was almost certainly the painting entitled Ferdinand VII with Robes of State, now also in the collection of the Prado Museum. However, for the subject's face Goya used the studies that he had made for the realization of the equestrian portrait of the king in 1808, just as he would do for all of his portraits of this king, which is why the face is always the same and is always at the same angle.

The monarch appears here in military gala dress, with the blue and white sash of the Order of Charles III and a number of medals. Goya has placed the king in a natural landscape in which, in the background, we see a military camp with tents and horses. This work could be seen as being slightly ironic, given that Ferdinand VII never took part in any military campaign, spending the Spanish War of Independence in the safety of France. According to Margarita Moreno, this painting is reminiscent of other military portraits by Goya, such as that of Godoy, in which we are also made aware of the action taking place before a low horizon.

In terms of technique, we can appreciate a difference between the brushstrokes used for the horses and the tents, which are much looser and freer, and those used on the main figure.

A replica of this work exists in the Army Museum in Madrid.