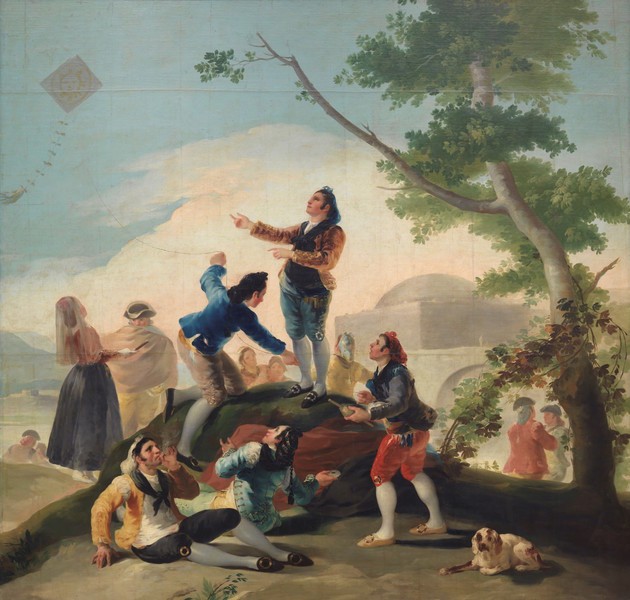 This work forms part of the series of ten cartoons of country themes for tapestries designed to decorate the dining hall of the Prince and Princess of Asturias in the palace of El Pardo. Together with this cartoon, Goya delivered three more from the series: Card Players, Boys Inflating a Bladder and Boys Picking Fruit. They were made between 12 August 1777, the date of the previous delivery of cartoons to the Royal Tapestry Factory, and 26 January 1778, the date of this delivery.

The tapestry of this cartoon occupied the central portion of the north wall of the dining hall.

The composition of this work responds to the pyramid arrangement recommended by Mengs, a model that Goya had employed with success in other pieces in this series and which he would continue to use later. The work has a foreground with figures forming a pyramid, plus a second intermediate plane with figures that are semi-hidden by a mound and a background landscape, as in the pair of overdoor works, The Parasol and The Drinker.

and The figures in this leisure scene show a humanist approach that was to become one of Goya's defining characteristics. Four majos are flying a kite whilst a fifth sits smoking a cigarette. Other figures look on whilst another man only has eyes for the girl before him.

Attempts were made to identify the location as the hill of El Rastro, in Madrid, and the domed construction that appears in the background as San Francisco el Grande - by the architect Francesco Sabatini - when it was still in construction. However, this is impossible since in another cartoon in the series, Dance on the Banks of the Manzanares, delivered on 3 March 1777, Goya depicted this same building completely finished.

Elsewhere, it has been suggested that this building could be the observatory, the construction of which was being discussed at the time in the court of Charles III. The hypothesis of the observatory also adds weight to Tomlinson's reading of this cartoon, relating it to vanitas iconography and the futility of human knowledge. The kite, symbol of scientific experimentation, fits perfectly with this interpretation.