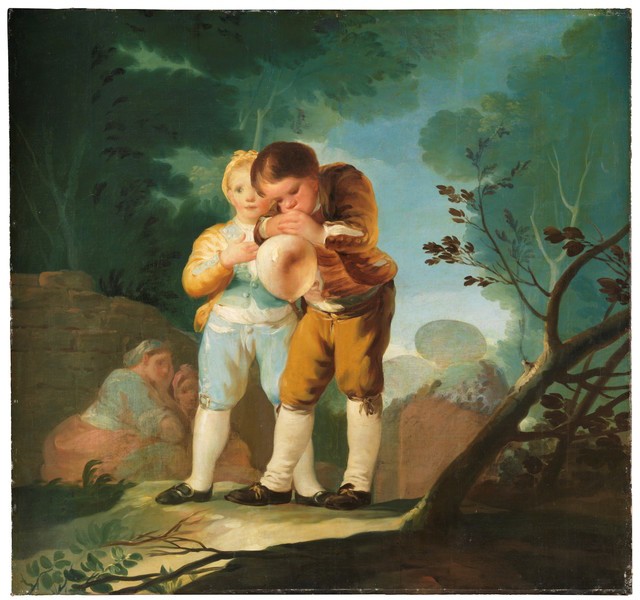 The tapestry resulting from this cartoon was to hang over the north door of the dining room and formed a pair with that of Boys Picking Fruit.

As pointed out by Tomlinson, the scene may have been inspired by the print La vessie by Philippe Le Bas (Paris, National Library), based on the painting by David Teniers. The subject of children's games serves as a counterpoint to the main cartoons starring adults, The Kite and Card Players, and, continuing with the symbolism of vanitas, this work appears to aim to counteract the concerns of the grown-ups, the uselessness and futility of their science and their gambling, with the carefree play of children.

This is one of Goya's earliest representations of children, a topic which he would later become known for thanks to his ability to depict them with great realism, candour and tenderness, his skill already evident in the face of the boy waiting to tie the knot in the bladder.

Because of its pastel colours and the subject matter of games and the wind, Cruzada Villaamil saw a close relationship between this cartoon and that of The Kite. Just like the children have fun blowing up the bladder until it bursts, the adults delight in the flying of a kite, as ephemeral and passing as the wind.

Further away in the distance, on the left, we can see two women. The more visible of the two is the one sitting on the left-hand side, with her head resting on her hand in a gesture of melancholy. Tomlinson has interpreted this figure as a sibyl, confirming the fleeting nature of childish fun and the inevitable passage of time. Other writers, including Morales, are of the opinion that Goya was simply representing a traditional scene of children at play.

On the right there were initially two labourers wearing wide-brimmed hats to protect themselves from the sun. Although they appear in one of the tapestries, they have disappeared from the painting after being rather clumsily painted out. Weavers at the Royal Tapestry Factory were almost certainly responsible, wishing to make their job easier, since other tapestries exist in which these two figures do not appear.