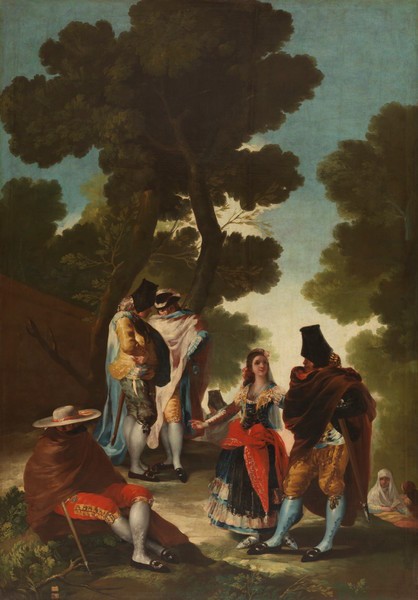 See Quarrel in the New Tavern.

The scene features a long vertical composition and takes place on the roads of Andalucía, it being possible to identify this setting thanks to the description made by Goya himself and by the attire of the figures, of such interest to the enlightened liberals of the time.

The theme of the work is jealousy. One of the masked men gets ready to fight the seated man who has made a flirtatious remark towards the gypsy girl, whilst she insists that the pair continue on their way. The theme appears to be taken from one of the comical plays or songs of the period, made popular by Ramón de la Cruz.

Alternative interpretations of this cartoon have also been recorded, however. In the 19th century, the gypsy girl was identified as the Duchess of Alba and the men provoking the tense scene as the toreros Costillares and Pepe Hillo, although it was proved that such a reading would have been impossible due to the young ages of these real-life figures at the time the painting was made.

The last interpretation was made by Tomlinson, who identified the scene as a representation of envy, in line with the moralistic tone of this series of cartoons and its relationship with the seven deadly sins.

Some tones have been darkened by the ferruginous preparation used in the ground.