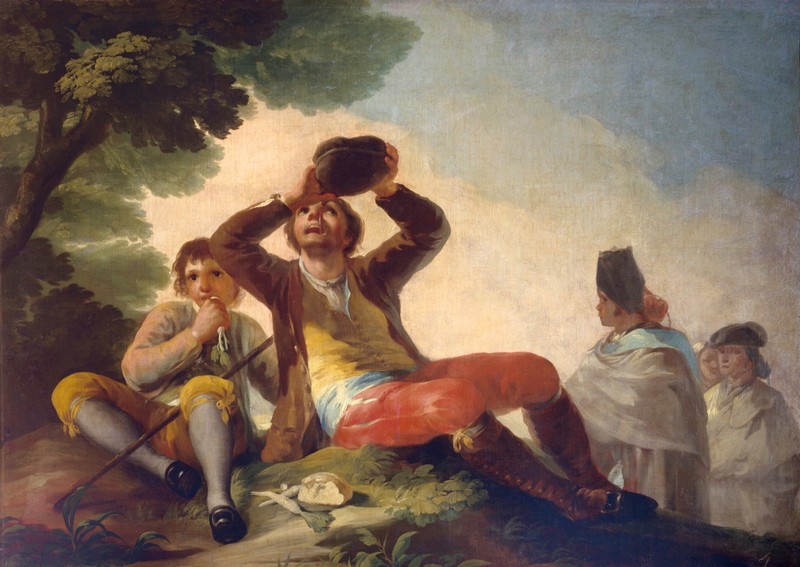 See Quarrel in the New Tavern.

The Drinker formed a pair with The Parasol; the tapestries resulting from these cartoons were designed to be hung over the doors on the east side of the dining room.

Executed with a low perspective, taking into account its elevated position above the door, this cartoon shows the main figure drinking from a Catalan wineskin, a detail specified by Goya on the invoice. Next to him sits another young man and behind are three figures who appear to have been included to compensate for the unsteady, greedy drinker, whose silhouette stands out against the blue sky behind. The composition as a whole fits a pyramid structure, with the artist thus distancing himself from the influence of Francisco Bayeu. This work is also of Goya's own invention, as he assures in the paperwork delivered to the Royal Tapestry Factory.

According to Tomlinson's interpretation, who saw in this series of cartoons a moralistic meaning relating to the seven deadly sins, this particular work would represent the sin of gluttony.

The same author also believed that Goya may have taken his inspiration for this piece from the novel El lazarillo de Tormes, which was extremely popular in Spain at the time. We can see a cane, which would allude to the blindness of the drinker, whose gaze is lost in the middle distance, and the young man at his side would be the character of the lazarillo, the blind man's guide, who, with a look of resignation on his face, is eating his simple meal (bread and turnips, as seen in the still life in the foreground) whilst the blind man finishes off the wine without stopping to share any with his companion.