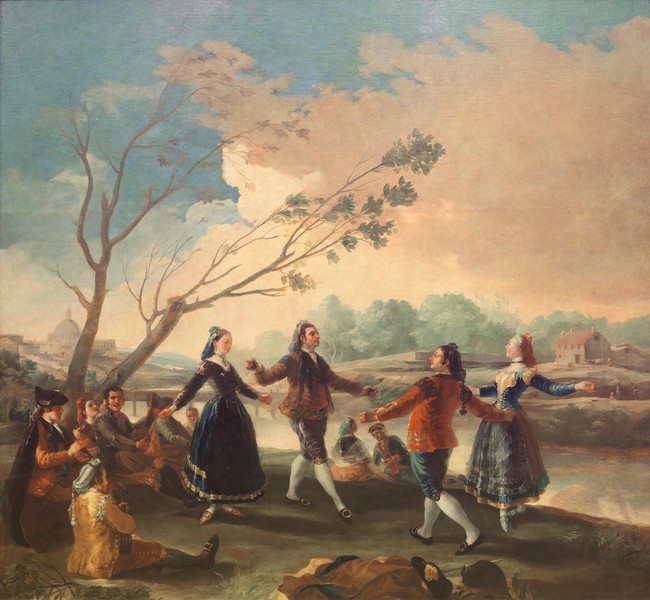 This work forms part of the series of ten cartoons of country themes for tapestries designed to decorate the dining hall of the Prince and Princess of Asturias in the palace of El Pardo. This one was delivered on 3 March 1777.

Around 1856 or 1857, the cartoon was moved from the Royal Tapestry Factory of Santa Bárbara to the Royal Palace in Madrid. On 15 February 1870, it was taken to the Prado Museum under orders given on 18 January and 9 February.

This cartoon is of Goya's own invention, something which he himself emphasizes on repeated occasions on the invoices for this first series of independently-made cartoons in order to distance himself from the influence of Francisco Bayeu.

The composition resembles that of The Picnic, the cartoon of the tapestry that is this one's pair, and its dimensions are very similar. It is a landscape based on the different heights of terrain across which the figures are distributed. The Manzanares river acts as a horizontal axis, separating the foreground from the background. In the foreground, two majos and two majas are dancing a seguidilla, whilst other figures either play musical instruments or clap in time to the music.

The setting was identified thanks to the description made by Goya on the invoice. The dome that can be seen at the back on the left belongs to the church of San Francisco el Grande, next to the Royal Palace. On the right, also at the back, over the other side of the river, we can see the grounds of the Casa de Campo. Gassier and Wilson considered this to be, in topographic terms, one of Goya's most convincing landscapes.

In the artist's handling of the paint we see brushstrokes that are more fluid and colours that are more vivid - Goya is finding his own personal style.

There exists a preparatory drawing (rec. no. ?) of the man clapping in time to the music.

Francisco Zapater y Gómez owned a preliminary sketch for this cartoon, which came from his uncle, Martín. This sketch was exhibited in the Hispanic-French Exhibition of Zaragoza (1908) when it was the property of Timoteo Pamplona and is only known thanks to a photograph in the Coyne photographic archive (AHPZ-Government of Aragón), given that the whereabouts of the sketch itself are now unknown.