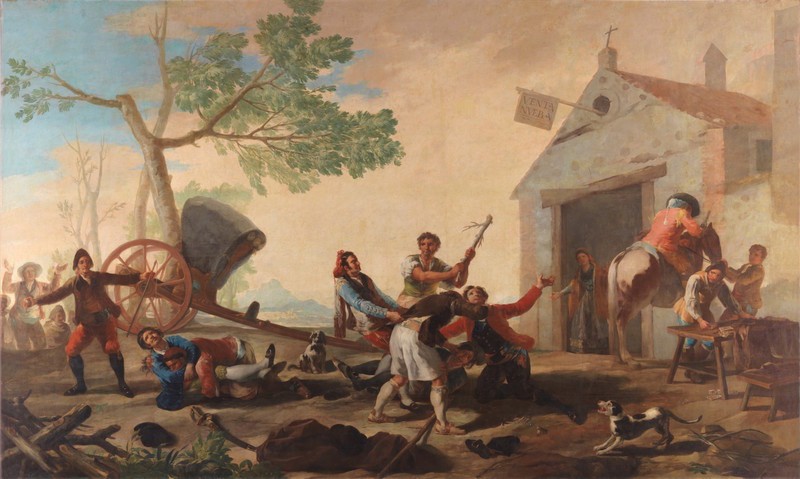 This work forms part of the series of ten cartoons of country themes for tapestries designed to decorate the dining hall of the Prince and Princess of Asturias in the palace of El Pardo. Along with this cartoon, on 12 August 1777 Goya delivered three more belonging to the series: Maja and Cloaked Men, The Parasol and The Drinker. The artist must have made them between 3 March, the date on which he delivered the first cartoon, Dance on the Banks of the Manzanares, and 12 August, the delivery date of these cartoons. It seems an unusually long amount of time to complete four cartoons and the reason for this delay was that Goya fell ill during this time, which we know thanks to his correspondence with Martín Zapater.

Around 1856 or 1857, this cartoon was moved from the Royal Tapestry Factory of Santa Bárbara to the Royal Palace in Madrid. In 1870, it was taken to the Prado Museum under orders given on 18 January and 9 February.

This piece has the largest dimensions of the whole series, although it was cut down lengthways by around 50 cm, measuring 469 cm when Goya described it in the invoice. As such, we can assume that this was the main scene, though there exists no description in any known document of the how the tapestries were arranged within the dining room.

The scene depicts the disturbance caused by a card game at a venta, or tavern, a place frequented by travellers and muleteers, on the outskirts of Madrid (the location has been identified by Sambricio as the Venta del Espíritu Santo, in today's neighbourhood of Las Ventas). Its composition has a pronounced horizontal and theatrical character, recalling the sainetes, or short comical plays, of the period, made popular largely thanks to the work of Ramón de la Cruz. The landscape serves as backdrop in front of which are placed, at different heights, four groups of people: the innkeeper on the right, the group of five men fighting in the centre, two more struggling on the ground to their left, and another getting ready to hurl a stone, closing off the "scene" on the left-hand side. Poking out of the circular window in the gable is a sign that reads "VENTA NUEBA", or "NEW TAVERN".

The exaggerated poses and expressions of the figures evoke actors in a theatrical performance. Also remarkable are the clothes of the figures, inspired by the interest that the enlightened population of the period showed in the attire and different types of people of Spain, according to Tomlinson. For example, even the character who has his back turned to the viewer can still be easily identified as a native of Murcia thanks to his short trousers and sandals.

Tomlinson gives the series of cartoons a moralistic character, and believes that Goya may have taken his inspiration from the theme of the seven deadly sins, represented in a work by Hieronymus Bosch housed in the palace of El Escorial and in a series of Flemish tapestries from the 16th century that formed part of the royal collection and to which Goya would have had access. The compositional similarities with these other works may be trivial but are undeniable. According to this hypothesis, this particular cartoon would be identified with the sin of wrath.