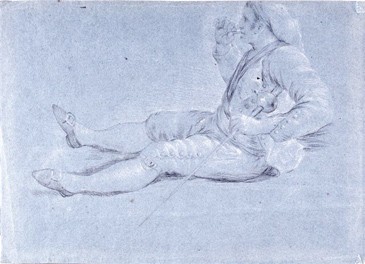 This is a preparatory drawing for the tapestry cartoon The Picnic.

On the verso of this piece we find another preparatory drawing entitled Surrender of Seville which does not coincide with any known definitive Goya work, probably because it was never executed.

The majo or young man who we can see in the drawing is depicted using the same technique used in all the sketches Goya produced when preparing tapestry cartoons. Since he learned this technique from Francisco Bayeu, some of the studies show the clear influence of the painter's brother-in-law.

Tomlinson has observed that the artist employs very faint lines which even disappear in places, being replaced by spots of light. This dependence on light to depict contours is characteristic of the pictorial style of Goya's tapestry cartoons.