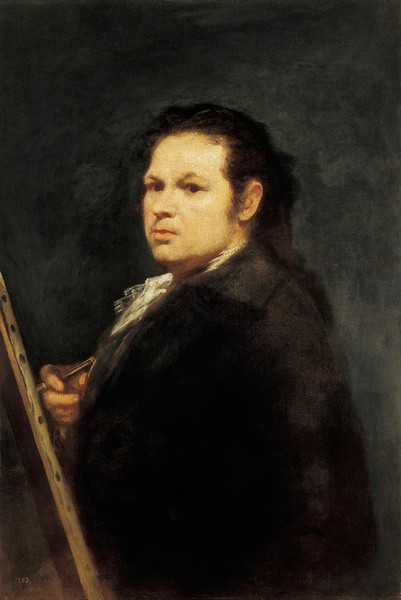 This work might correspond with a self-portrait that appears in the inventory, made by Brugada in 1828, of the paintings found in the Quinta del Sordo after Goya's death.

In this slightly more than half-length self-portrait, Goya appears before a canvas, holding a brush in his right hand, ready to paint. He is staring out at the viewer with a look of intense concentration on his face. Behind him is a flat, neutral background. The only other element we can see in the composition is the edge of the canvas. Goya's body is solid and heavily-built, his face fleshy and voluminous and his full head of hair pulled back in a pony tail.

He is wearing a dark jacket, which blends into the background, and a white shirt which, apart from his face, is the only strongly lit element in the painting. This is the same face as the self-portrait in Sermon of Saint Bernardine of Siena.

According to Gudiol, this self-portrait should be considered in terms of the genre as a transitional work between the neoclassical style and the Romanticism of the 19th century.