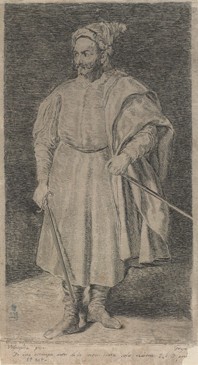 For this etching, Goya made several state proofs, the first of them before applying the aquatint, roulette and burin. This proof has a piece of paper affixed to it with lines traced in ink and a handwritten note in black ink: Velázquez painting; Goya; only 2 or 3 proofs of this print exist before the mezzotint [aquatint]. It is cut off inside the imprint left by the plate.

The second state proof includes the work done using the roulette and burin. Stamped on the reverse is The Buffoon Don Juan de Austria. This proof came from the Valentín Carderera Collection. The third state proof was made in aquatint, before the burin and the lettering. Barbarroxa appears, written in ink.

There exists a preparatory drawing for this etching in the Hamburger Kunsthalle.

Velázquez's The Buffoon Barbarossa, Don Cristóbal de Castañeda y Pernia (Prado Museum, Madrid) dates from around 1636, although it was never finished. Camón Aznar distinguishes two phases in the realization of this painting, explaining that it may have been started between 1623 and 1624 and continued between 1648 and 1653. Don Cristóbal de Castañeda was one of the buffoons of the royal court of Philip IV. He was known for his eccentric behaviour, boastful character and lack of manners. The painting shows him dressed in what must have appeared to him to be the costume of a Turk, since he was supposed to be dressed as the pirate admiral Khair-ed-Din, otherwise known as Barbarossa.

Goya has accurately copied Velázquez's painting. In his print, the pale-toned figure stands out sharply against the dark background. He has faithfully captured the fiery expression and irascible gaze that characterize this character. Although it is true that Goya displays greater skill in this etching than in some of the others from this same series, it should be noted that this canvas by Velázquez, simpler than many of his others, would have been easier to transfer to a metal etching plate. The folds in the fabrics are large and uncomplicated and the only point of reference in the background to contend with is the shadow of the figure.

The etching plate is conserved in the National Chalcography Museum (cat. 164). It came from the Fondo de Recuperación of 1948 (body created to recover works of art taken out of Spain during the Civil War)