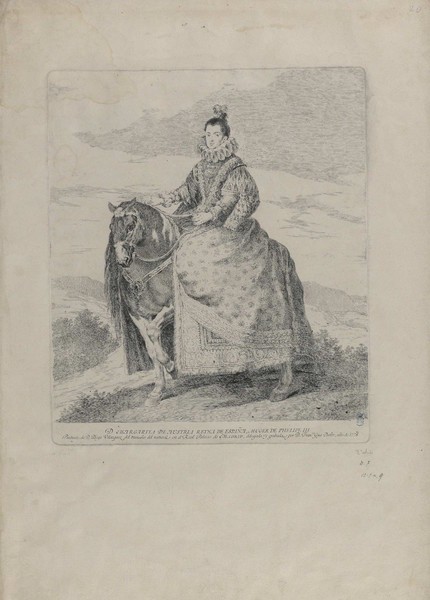 Velázquez painted his equestrian portrait of Queen Margaret of Austria for the Hall of Kingdoms of Madrid's Buen Retiro Palace in 1633 (Prado Museum, Madrid). It is a somewhat controversial work, and possibly the least Velázquez-like of all of the equestrian portraits that have survived to this day.

The horse, a mix of Andalusian and Flemish breeds, is adorned with a ribbon on its forehead and a heavy horse blanket which is draped across its body. On its back sits the queen, dressed in an extravagantly oversized and excessively decorated outfit, very heavy in appearance, which recalls the clothing worn by the figures in works by Juan Pantoja de la Cruz (Valladolid, 1553-Madrid, 1608). The queen's face is framed by a large ruff and over her tied-back hair is a small cap, topped off with a plume of feathers.

Out of all the copies of Velázquez's paintings in this series, this etching is the one in which Goya betrays the greatest uncertainty, suggesting that it was most likely one of the first to be executed. The horse on which Margaret of Austria is mounted has, in Goya's etching, become a motionless mass. Somewhat more interesting is the queen's clothing, in which, though only superficially, Goya has been able to capture the decorative motifs. Margaret of Austria's face, which is already rather inexpressive in Velázquez's painting, becomes even more neutral in Goya's etching, which strays away from the original work here. The landscape has been depicted using the same technique employed in Philip III, and is perhaps the most successful aspect of Goya's copy. However, it should be noted that he leaves out the garden and the fountain which can be seen in the oil painting, in the lower left-hand corner.

According to Harris, much of the work was done using light drypoint: on the horse's mane, on the right-hand side of the queen's dress, on the fringe at the bottom of the blanket, and just below the queen's dress.

The unbevelled etching plate is conserved in the National Chalcography Museum (cat. 158).