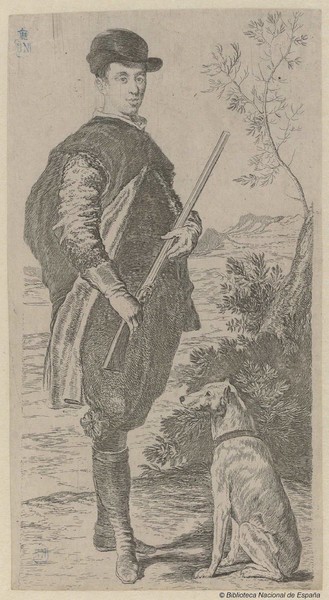 This is one of the etchings from this series where Goya displays the greatest urgency and also the great meticulousness. He made at least five state proofs of it, all conserved at the National Library. The first shows the first etching, before the second bite and the application of the roulette and the aquatint. The reverse of this proof features a note written in pencil. Opinions concerning which was the next proof differ. In the proof that Sayre says is the second and which Harris insists is the third, horizontal lines are added in the sky and the landscape, and both the bushes and the figure of the infante himself are fleshed out. It is possible to detect some partially burnished out foul bites on the dog's neck, beside the infante's left leg and on his left hand. This proof was made before the roulette and the aquatint were applied. It has also been picked out in partially smudged black pencil. Written in the bottom border in graphite pencil is the following: Philip IV, King of Spain, copy by Goya, in the year 1778, from an original by Velázquez. [This] is a proof and the print was discarded.

What Sayre calls the third state proof (and Harris calls the second) is the one in which Goya adds the third etching and extends the bushes out to meet the figure of the infante. There are burnished areas on the left border and on the foul bites in the background, on the infante's leg and on the dog's neck and collar. This proof was made before the roulette and the aquatint were applied. Written on affixed paper, in handwriting that possibly belongs to Carderera, is the following: Proof, perhaps unique for this state, before the background, which is very dark.

The last state proof that we have is the fifth, made using aquatint but before the lettering was written onto the plate. On it, handwritten in ink in the bottom border we see: An infante of Spain. Painting by Don Diego Velázquez, life-size, in the Royal Palace of Madrid. Drawn and etched by Francisco Goya, Painter. This state proof belonged to the collection of Valentín Carderera, who added the title to the plate at a later date.

Velázquez painted his portrait of The Cardinal-Infante Don Ferdinand of Austria as a Hunter between 1632 and 1636, to hang in the Torre de la Parada. The cardinal-infante was a brother of Philip IV. The Sevillian painter was never to paint him again since he travelled to Flanders where he became governor. However, whilst there he went on to have his portrait painted by the likes of Peter Paul Rubens (Siegen, 1577-Antwerp, 1640), Anthony van Dyck (Antwerp, 1599-London, 1641) and Gaspar de Crayer (Antwerp, 1582-Ghent, 1669).

The cardinal-infante is shown here wearing a suit of black and silver, suede gloves and a black hat. In his hands he holds a rifle and sat at his feet is a tan-coloured hound. As in other works by Velázquez, in the background we can see the hills around Madrid, which the artist has captured in loose, flowing brushstrokes.

Goya took a special interest in his copy of this painting. He experimented with different technical solutions, in particular adding more and more bites to the plate in order to make the faces of the infante and the dog stand out and to obtain a more varied range of tones.

Unlike in some of the other copies he made of works by Velázquez, here Goya has successfully captured the landscape, the misty sky, the bushes behind the dog and the tree hanging over both of the figures. Equally skilful is his representation of the dog sitting at the cardinal-infante's feet. But the placid expression on the animal's face in the painting by the Andalusian artist bears little resemblance to what we can see in Goya's etching, in which the dog's simplified gaze comes across as somewhat listless, and wholly inexpressive.

The etching plate is conserved in the National Chalcography Museum (cat. 163). It came from the Fondo de Recuperación of 1948 (body created to recover works of art taken out of Spain during the Civil War).