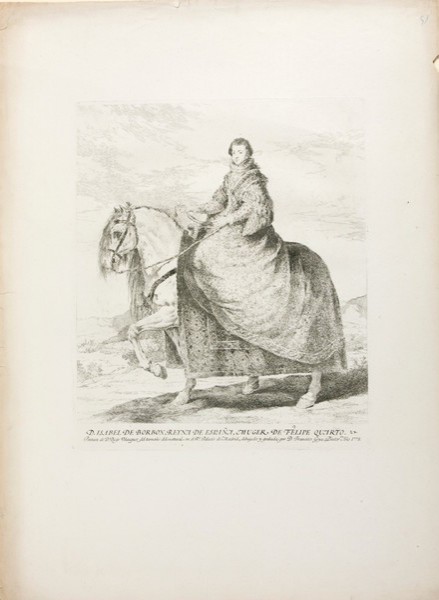 There exists a state proof of this etching which was made before Goya applied the second etching, the drypoint and the lettering. It came from the Valentín Carderera Collection, and is now housed in the National Library.

Up to three different editions are known: the first made in black ink; the second in greyish-sepia ink; and the third in dark greyish-brown ink. Written in pencil on this third-edition print, in the lower right-hand corner, we see the word Merelo.

This portrait of Isabella de Bourbon on horseback belongs to the group of equestrian portraits from the Hall of Kingdoms at Buen Retiro Palace (1735-1736, Prado Museum, Madrid). The queen is shown sitting on a horse, which is seen in profile as it marks time, its left leg raised. Most of the animal's body is covered by the queen's clothing: a silk bodice embroidered with stars and a huge walnut-coloured skirt - covered in gold embroidered motifs depicting the monarch's coat of arms and initials - which falls over the top of the horse's blanket. Her face, turned to look out at the viewer, is framed by a white gauze ruff. As in some of the other equestrian portraits made for the Hall of Kingdoms, in the background we see the mountains around Madrid, and it is just possible to make out some buildings in the lower left-hand corner.

Once again, just as he had done in the Portrait of Margaret of Austria, Goya leaves a sizeable patch of white in the middle of the queen's clothing and also does away with certain aspects of the landscape as it appears in the original work by Velázquez. In Goya's etching the trees which appear on the right-hand side of the painting have disappeared, as have the buildings which can just be made out on the left. The clouds have also been simplified in the print. The queen's face in Goya's etching is even more blank and inexpressive than in the Prado painting. The lines of the etching are weaker than those in the portrait of Philip IV, perhaps suggesting that this work was made prior to that of the king, and that it was made following similar criteria to those used in the equestrian portrait of Margaret of Austria.

The plate was etched in two stages: first, the drawing and a light initial bite were made; then, in the second phase, the plate was re-etched, following the retouches made in ink on an earlier proof. There are also some light touches of drypoint just below the horse's nose.

The etching plate is conserved in the National Chalcography Museum (cat. 160). It came from the Fondo de Recuperación of 1948 (body created to recover works of art taken out of Spain during the Civil War).