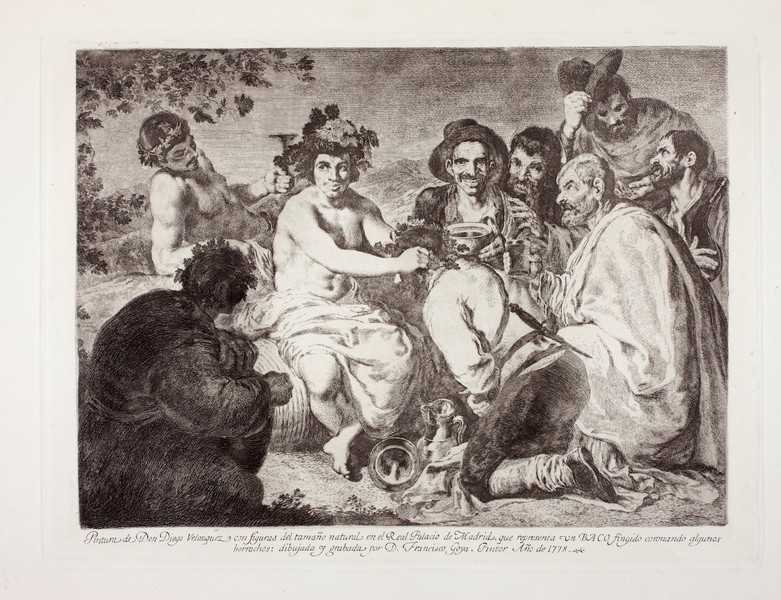 The production of this etching was announced in the Gazeta de Madrid of the 28th July 1778.

The Drunks or The Triumph of Bacchus was painted by Velázquez in Madrid and partially retouched upon his return there from his first trip to Italy, in 1631 (Prado Museum, Madrid). In the centre of the painting we see the god Bacchus - showing the influence of Caravaggio's (Milan, 1571-Porto Ercole, 1610) depiction of this same subject (Ca. 1598, Uffizi Gallery, Florence) - as he crowns one of the drunken men with whom he shares the scene. The inebriated state of the characters in the painting is given away by the foolish grins on their faces. Their rough clothing and common appearance contrasts with that of Bacchus, perhaps the only figure who seems to fit in well in a mythological painting. Velázquez has painstakingly represented the various glass and ceramic objects being used to hold the wine.

Goya's copy of this work is noticeably brighter and paler than the original. He has done away with the difference that existed between the pearly white flesh of Bacchus and the dark, coarse fabrics worn by the group of drunkards who accompany him. In so doing he has mixed together the two clearly defined areas that Velázquez had created in the image, and as such has provided a single unified space which is out of keeping with the original. He has even picked out the figure crouching down in the bottom left-hand corner, who is far less visible in the Prado painting. However, Goya demonstrates ample skill in his rendering of the folds of the fabrics, especially on the clothing covering the lower half of Bacchus' body.

As for the faces of the characters, we can appreciate a certain fixed quality about their expressions in Goya's etching, in which the shadows created on the left-hand side of each face in the original by Velázquez are largely absent, with the result that the features appear brighter and more exposed.

Despite his precise work, Goya has altered certain aspects of the painting which affect its interpretation, especially in his decision to do away with the painting's division into two distinct areas, which Velázquez uses to make reference to the two different worlds being depicted. Instead, Goya creates a single, evenly lit space, in which it is almost impossible to discern the location of the source of light.

The etching plate is conserved in the National Chalcography Museum (cat. 156). It came from the Fondo de Recuperación of 1948 (body created to recover works of art taken out of Spain during the Civil War).