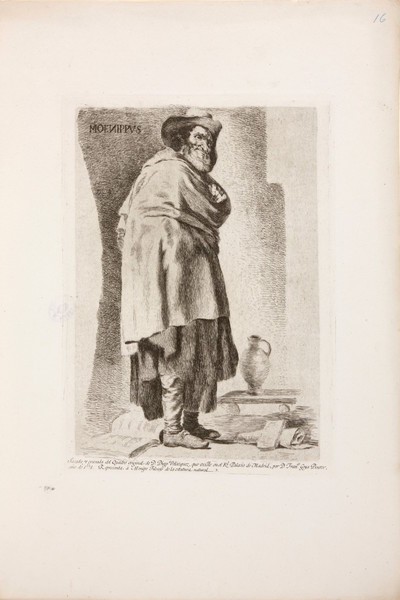 There exists one state proof and three different editions of this print. The proof contained a number of inscriptions along the bottom, which were subsequently erased: Diego Velaz-quez (on the left) and FG (on the right). This state proof was made before the lettering was added to the plate and so, near the bottom, inside the imprint of the plate, the artist has written in black ink: MENIPPUS, PHILOSOPHER / Painting by Don Diego Velázquez, which is in the Royal Palace of Madrid, etched by Don Francisco Goya, Painter, in 1778. Written in pencil along the bottom, possibly by Carderera: Proof prior to lettering.

The first edition was printed in black ink, the second in a greyish-sepia ink, and the third in dark greyish-brown ink. This last edition has some foxing, caused by oxidation, in the upper right-hand corner and a horizontal scratch in line with the figure's legs. Handwritten on this third-edition print, in the lower right-hand corner, we see the word Merelo.

Velázquez's painting of Menippus, just like his Aesop and Mars, was made to decorate the hunting lodge known as the Torre de la Parada, in around 1640 (Prado Museum, Madrid). There is no doubt as to the identity of the character, since we can clearly see in the upper left-hand corner the name MOENIPPUS. The Greek philosopher, born in Gadara in around 270 BC, belonged to the school of philosophers known as the Cynics. Menippus was originally a slave who, thanks to the money his works earned him, was able to purchase his citizenship in Thebes. He is said to have been a miser and that he committed suicide after eventually losing his fortune, for which reason Velázquez has depicted him as dressed in rags. He stands in profile, with his face, bearing a somewhat sarcastic expression, turned towards the viewer. His body is largely concealed by the tunic he wears, with only his legs visible. At his feet Velázquez has painted books, a roll of parchment, and a clay jug resting on a plank of wood which is precariously balanced on two cylinders, an allusion to the instability of life.

Goya sticks closely to Velázquez's painting and accurately copies each one of the elements that appear in the original canvas. The philosopher's sarcastic expression is very well recreated by the artist from Aragón in his print, and one might even say that it has been heightened by the clarity with which the beard and the hat framing his face have been rendered. Similarly, Goya has constructed an interesting interplay of light and shadow on the clothing, leaving a large patch of white in the centre. Just like Velázquez, Goya has written the name MOENIPPVS in the upper left-hand corner, although in this case the N is shown back to front, perhaps a moment of carelessness by Goya.

This etching from the series of Goya's copies of works by Velázquez appears to be a more successful adaptation, both in terms of the etching technique and in terms of its being more to the liking of the Aragonese painter, who seems to have been more comfortable making this copy than he was doing the equestrian portraits.

The etching plate is conserved in the National Chalcography Museum (cat. 166). It came from the Fondo de Recuperación of 1948 (body created to recover works of art taken out of Spain during the Civil War).