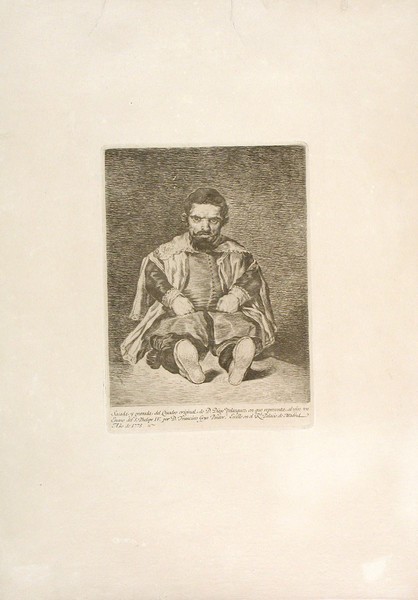 There exist copies from three editions of this print: the first made in black ink; the second in greyish-sepia ink; and the third in dark greyish-brown ink. Handwritten on this third-edition print, in the lower right-hand corner, we see the word Merelo. The name Diego Velazquez and the initials FG were added in drypoint in the lower left- and right-hand corners, respectively, in an earlier state and then later erased when the title was added for the first edition.

Don Sebastián de Morra was painted by Velázquez between 1643 and 1644 (Prado Museum, Madrid). The sitter served the Cardinal-Infante Ferdinand of Austria in Flanders, returning to Spain following his master's death in 1641 to enter the service of Prince Balthasar Charles. The prince felt a genuine fondness for Don Sebastián, and even left some valuable objects to him in his will. In fact, it is thought that the dwarf sometimes accompanied the prince on his hunting outings, of which the royal was a great enthusiast.

Don Sebastián de Morra is shown from the front, sitting with his hands resting on his legs and looking straight out at the viewer. The expression on his face shows an acute awareness of his status, as well as a great sense of maturity contained within his diminutive body. He wears a green suit underneath a short red and gold robe, perhaps a gift from Prince Balthasar Charles.

Goya has copied Velázquez's painting with skill and precision. He has used regular horizontal lines to build up both the dark background against which the figure of the dwarf stands out and the clothes he wears. The white of the paper has been left to show through at the front of the composition, on the soles of the figure's shoes, his hands and his crimson robe. In his description of the face, Goya has managed to capture the dwarf's intelligent, resigned expression.

Just as we see in the copies that he made of buffoons and philosophers in this same series, Goya appears to be more comfortable in this etching, resulting in a copy which is much closer to Velázquez's original than some of the other prints.

The etching plate is conserved in the National Chalcography Museum (cat. 167). It came from the Fondo de Recuperación of 1948 (body created to recover works of art taken out of Spain during the Civil War).