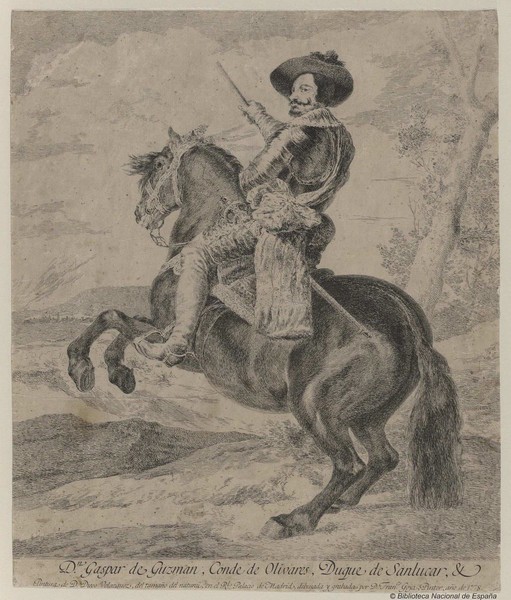 Three different editions of this etching exist: the first made in black ink; the second in greyish-sepia ink; and the third in dark greyish-brown ink. Handwritten on this third-edition print, in the lower right-hand corner, we see the word Merelo.

Velázquez's Portrait of the Count-Duke of Olivares may have been painted between 1632 and 1633, after his first trip to Italy (Prado Museum, Madrid). In that work we see Don Gaspar de Guzmán, son of the second Count of Olivares, ambassador in Rome during the reign of Philip II, astride a prancing horse. The animal is turned towards the background, where we see a battle taking place, which Philip IV's royal favourite, his raised hand brandishing a baton, seems eager to join. This gesture, along with the purposeful expression on his face, present a clear, intentional contrast with the passive mood of the equestrian portrait of Philip IV.

Goya employs a similar working method for this image as the one used in the portrait of Philip IV, i.e., applying regular lines to build up the body of the horse and the armour worn by its rider. Both figures stand out boldly against the background, which Goya has rendered more faithfully here than in some of the other copies. It is likely that he was aware of the importance of the scenery, both in the correct interpretation of this work by Velázquez and in the characterization of the figure.

The etching plate is conserved in the National Chalcography Museum (cat. 162). It came from the Fondo de Recuperación of 1948 (body created to recover works of art taken out of Spain during the Civil War).