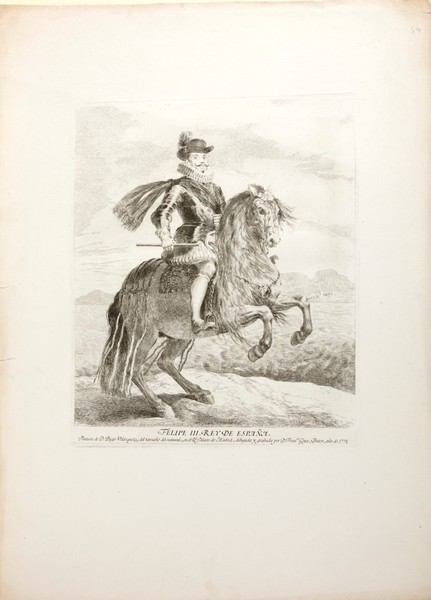 The project to produce etchings of the most important works of art housed in the country's royal palaces and other notable collections formed part of a wider programme meant to publicize Spain's artistic treasures, both within its borders and abroad. The idea was supported by Spain's enlightened minority, who insisted on the importance of disseminating art and culture through the printed image. Antonio Ponz (Bejís, Castellón, 1725-Madrid, 1792), for example, declared the following in 1776: "(...) it would be a plausible enterprise to make prints of these [the paintings from Buen Retiro Palace] and other excellent works, by so many classical, foreign and national artists, such as there are in Spain, unknown to all and, consequently, far less appreciated than they deserve to be. Europe is very hazily aware that in Madrid, and in particular in the Royal Palaces and El Escorial, there are some stupendous works, but few have any idea of what they are, because hardly anyone has seen even a paltry print of any of them."

A precedent for this initiative was the work of Juan Antonio Salvador Carmona (Nava del Rey, Valladolid, 1740-Madrid, 1805) who in 1770 had made prints of two paintings attributed to Bartolomé Esteban Murillo, The Vintager (La vendimiadora) and The Wine Merchant (El vinatero). These two reproductions served as examples for the project being proposed by Spain's ilustrados. The idea of publicizing art in Spain through the use of an such a well-known artistic mechanism as the print was backed by the Count of Floridablanca (Murcia, 1728-Seville, 1808) who in 1777 laid the groundwork for the production of the first prints, copies of the most important works in the palaces of Madrid.

It is in this context that we find Goya's copies of the paintings of Diego Velázquez, of which seventeen are known to us today (although it is possible that more than that were made), all executed between 1778 and 1779. Of Velázquez's entire body of work, Goya worked on a number of royal portraits and images of various court buffoons. This series of etchings was made by Goya at a time when he was yet to master the technique, which is why many of these prints reveal the mistakes and imperfections typical of an apprentice artist. We must bear in mind that in 1778, when he began work on his copies of Velázquez's paintings, Goya's previous experience was limited to a few religious prints, which he possibly made for himself, without any intention of publishing them, or simply as a tentative exercise in learning the technique of etching.

The series based on the paintings of Velázquez may well be the last set of prints that Goya produced as a commission. His later forays into printmaking represent a much freer, more intimate and extremely personal means of expression, in which he was to give free rein to his own concerns, interests and doubts, entirely free of the limits imposed by any commissioned work.

On the 28th July 1778 the Gazeta de Madrid announced the publication of Goya's first etchings in the series based on the works of Velázquez: "Nine prints drawn and etched by Don Francisco de Goya, Painter; the life-size originals of which, painted by Don Diego Velázquez, are to be found in the collection of the Royal Palace of this Court. They represent the equestrian figures of the kings Philip III and Philip IV, and the queens Doña Margaret of Austria and Doña Isabella de Bourbon, and Don Gaspar de Guzmán, Count-Duke of Olivares.They are to be sold at the bookstore of Don Antonio Sancha in the Old Customs House, and at that of Don Manuel Barzo, in the Carrera de San Jerónimo. Their prices are: the 5 equestrian portraits at 6 reales. And the remaining 4 at 3; and they are available together or separately." Goya also made etchings of Menippus, Aesop, Sebastián de Morra and Diego de Acedo "El Primo".

On the 22nd December that same year, as announced in the Gazeta de Madrid, two more prints went on sale: Equestrian Portrait of Prince Balthasar Charles and The Drunks. Sometime afterwards Goya made six more etchings, in which he tried out new technical processes such as aquatint, sometimes burnished, and tools like the roulette, combining them with straightforward etching and touches of drypoint and burin. These innovations marked a distinct evolutionary step compared with the rest of the prints in the series, which were almost exclusively etchings, only occasionally reinforced with touches of drypoint or burin work.

Last of all were Goya's copies of Las Meninas, Don Juan de Austria, El portero Ochoa or The Mayor of Ronquillo and The Boy from Vallecas, which Goya decided not to publish due to the technical errors it contained. This set of etchings was probably not made in 1778, as was previously thought, but was instead most likely finished sometime in the late 1780s, given that Madrid would have by then been home to printmakers who were sufficiently skilled in the technique of aquatint.

Two more works must be added to this set of copies of paintings by Velázquez: The Buffoon Don Juan de Austria and Barbarossa. For reasons which remain a mystery, Goya never published any prints of The Buffoon Don Juan de Austria, and only the first and third state proofs survive, the latter printed on the reverse of the second state proof of Barbarossa. In these two etchings, the artist uses, for the first time, a combination of etching and aquatint.

Goya's series of etchings based on works by Velázquez was made conscientiously, slowly and carefully, just as the considerable number of preparatory drawings which were made for them tells us. These use a variety of different media: ink, pencil, sanguine, etc. The most heterogeneous and interesting group of preparatory drawings is the one which Goya made using sanguine on the same type of Dutch paper that was used for the aquatint prints. The result of all this laborious work was images of a complexity that Goya was unable to carry over successfully to the metal etching plates.

Tomás Harris has been able to tell apart the different editions of Goya's prints by a careful study of the different papers, inks and bevelling of the edges of the plates. In this way he established that three editions of the prints housed at the National Chalcography Museum (Calcografía Nacional) existed: a first edition made between 1778 and 1779; a second from 1815 to 1820; and a third edition from 1868. For the group of royal portraits and that of the Count-Duke of Olivares, Harris points to a fourth edition, dating from between 1920 and 1930.

Nigel Glendinning, who in different publications has analysed the documents from the National Chalcography Museum concerning the printing and sale of Goya's prints, concludes that nine print runs were made of the group known as Horses (Caballos), as well as eight of the smaller prints, the so-called Little Plates (Láminas chicas), commissioned by the Calcografía Nacional.

The etching plates themselves are housed at the National Chalcography Museum, whilst the National Library holds all of the proofs and copies from the different editions of Goya's prints of Velázquez's paintings. That is also where the first three editions are kept, although the set of the second edition of The Drunks (Los borrachos) is incomplete.

The portrait of Philip III is one of the first plates to be made in this series, which most experts have placed logically within the set of equestrian portraits, Horses (Caballos).

Copies from the first three runs of this series have survived to the present day. The first series was printed in black ink, the second in a greyish-sepia ink, and the third in dark greyish-brown ink.

This series is made up of 17 prints in which Goya has experimented with different printmaking techniques, thus continuing with the learning process that began with the series of religious prints. These, however, are not works in which he is able to give free rein to his imagination, but instead demand that he stick as closely as possible to the works being copied. As such, Goya had to learn to precisely reproduce the effects of oil paint using the technique of etching. This led him, in some of these etchings, to be more concerned with capturing the overall pictorial effect rather than every last detail. He seems to have set himself the basic task of reflecting in the metal plates the artistic sensibility of Velázquez, along with his enormous mastery of the technique of oil painting.

However, Goya clearly has some difficulties in achieving these goals. In some cases he gives the figures a heaviness not present in the paintings by Velázquez and strays from an accurate rendering of their faces, which remain mere suggestions in some of the images. Although it is true that transferring the language of painting to an etching is a truly complicated task, the difficulties which Goya seems to have encountered can chiefly be put down to his lack of experience as an etcher. Similarly, he repeatedly falls back on the device already seen in his etchings of Saint Isidore and Saint Francis of Paula, in which he leaves large areas where the blank paper shows through, contrasting with the rest of the surface which is covered with the short, horizontal lines with which he constructs the shapes and volumes.

As already suggested in regard to the first etchings copied from Velázquez's paintings, Goya starts off using a straightforward etching technique before going on to incorporate aquatint, a method which he will later go on to master. In these images, aquatint serves to complement the lines already incised through the etching process and acts as a device for suggesting a more painterly surface. The technique of aquatint was first used by the man who may have been its inventor, Jean-Baptiste Le Prince (Metz, 1734-Saint-Denis-du-Port, 1781). Goya is quick to learn its use and employs it to achieve stronger contrasts between light and shade in his etchings.

Equestrian Portrait of Philip III (El retrato ecuestre de Felipe III) (Prado Museum, Madrid), whose authorship has been called into serious question, was finished by Velázquez in 1633 and hung in the Hall of Kingdoms in Buen Retiro Palace. Standing out against the backdrop of the mountains around Madrid is the figure of Philip III, mounted on a prancing horse and seen from a low angle. The monarch looks out at the viewer, his face framed by a ruff of fine Dutch lace. He wears the insignias of general and a red sash across his chest, knotted above the shoulder. In his right hand he holds a baton.

Goya has managed to masterfully capture the gleaming armour, along with the power physique of the horse and the motion of its flowing mane, which covers almost all of the front part of the animal. He depicts the surrounding landscape in just a few lines, attempting to capture the luminosity of the original painting by the Sevillian master. In the etching, the sky has been built up using tentative, almost gingerly applied, horizontal lines to represent the clouds, alongside large areas in which the plate has not been etched into at all. However, Goya has faced major difficulties in his depiction of the king's face, which has lost the vigour and determination with which Velázquez paints it.

According to Harris, the plate was made in two stages. First, Goya made the drawing and a shallow first bite, then, in a second step, the plate was re-etched to give greater emphasis to details such as the reins, as well as to fill in one or two gaps in the original print in the area of the stirrup. The artist also subsequently made use of drypoint on the king's back.

The plate has been housed at the National Chalcography Museum since 1790 (no. 157), part of the Fondo de Recuperación (body created to recover works of art taken out of Spain during the Civil War).