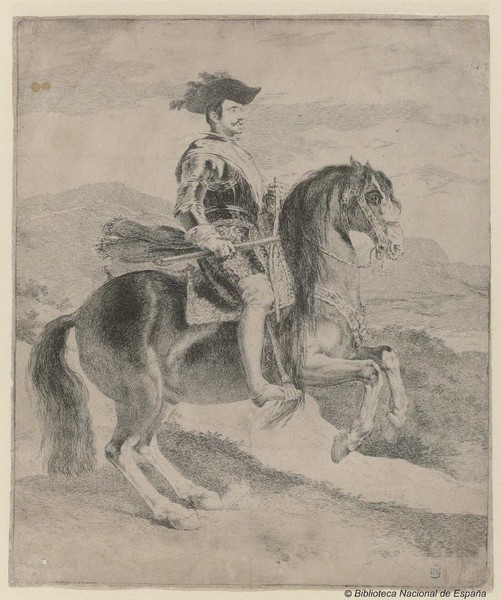 The second state proof was made by Goya before the letters were added to the etching plate.

The first edition was made in black ink; the second in greyish-sepia ink; and the third, announced in the 3rd edition of the Caprices, in 1868, was made in dark greyish-brown ink. Written in pencil on this third-edition print, in the lower right-hand corner, we see the word Merelo.

The original painting was part of the group of equestrian portraits that Velázquez painted for the Hall of Kingdoms at Madrid's Buen Retiro Palace (Ca. 1636, Prado Museum, Madrid). Set before the backdrop of the mountains around Madrid, we see Philip IV, in profile, mounted on a bay horse with black mane and tail and white legs and muzzle. The king is wearing a half-length suit of damascene steel armour, across the chest of which is a crimson sash, tied at the waist and with golden edging. His face is impassive and on his head is a broad-brimmed hat topped with black feathers. His right hand wears an amber glove and wields a general's baton.

When Goya copied this work he changed some of the elements in the background, leaving out the tree on the left-hand side of the painting and raising the mountains in that same part of the canvas. These modifications substantially detract from the etching when compared with the painting, since the landscape is one of the most interesting aspects of the portrait as carried out by Velázquez. In relation to the other equestrian portraits etched by Goya, the present image allows us to see how the painter has worked with greater skill and how he has intensified the lines, helping to describe more precisely the king's armour and the body of the horse. In this way he manages to create a stronger contrast between the figure in the foreground and the scenery behind, heightening the presence of the figure of the king on top of the white paper support.

The etching plate was made in two stages. First, the drawing and a light first bite were made. Later, further etching was done to bring out the shadows on the king's chest, the saddle, and the horse's flank and hind quarters, as well as to fill in the unworked area between the edge of the saddle and the animal's side.

The etching plate is conserved in the National Chalcography Museum (cat. 159). It came from the Fondo de Recuperación of 1948 (body created to recover works of art taken out of Spain during the Civil War).