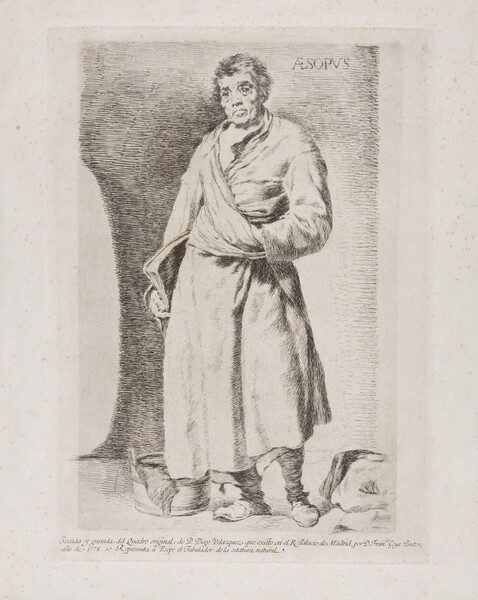 Velázquez painted this work, now in the Prado Museum in Madrid, in around 1640 to decorate the Torre de la Parada in the hills of El Pardo. It was possibly the companion piece to Menippus, which was also copied in an etching by Goya. Aesop lived between the 7th and 6th centuries BC, starting out as a slave before earning his freedom. Velázquez represents him as an elderly, white-haired man, wearing a tired expression and dressed in a brown smock tied at the waist with a length of white fabric. In one hand he is holding a book, whilst the other is hidden underneath his ragged tunic, by his waist. At his feet we see a stone on which, according to Cesare Ripa (Perugia, 1555- Rome?, 1622), the phlegmatic Aesop would have sat. In the upper right-hand corner appears the word AESOPUS to tell us the identity of the sitter, who would otherwise have remained anonymous.

Goya employs the same method in this etching of the painting by Velázquez as in his image of Menippus. He faithfully copies the scene and concentrates above all on the character's face, with its tired, pensive expression. He even seems to have made the features more dramatic. The drawing that precedes the print shows how Goya had already decided how he was to copy Velázquez's painting, as well as the intensity of the character's face and the hard contrast between light and shadow, aspects which lose a little of their intensity in the final etching.

The name AESOPVS appears in the upper right-hand corner. In an earlier state of the etching, the inscriptions Diego Velazquez and the initials FG also featured, in the lower left- and right-hand corners, respectively. These were later erased, when the title was added for the first edition.

The etching plate is conserved in the National Chalcography Museum (cat. 165). It came from the Fondo de Recuperación of 1948 (body created to recover works of art taken out of Spain during the Civil War).