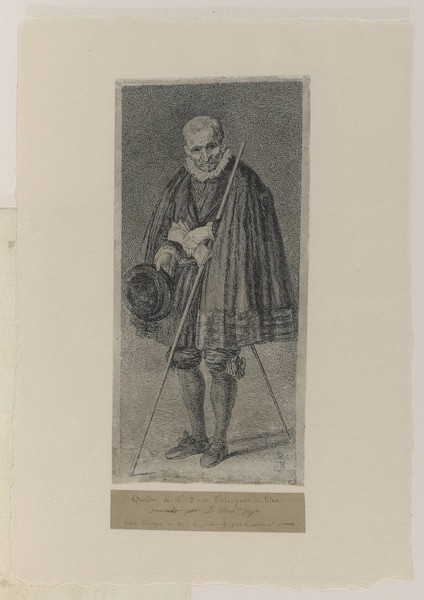 Quadro de D.n Diego Velazquez de Silva gravado por D. Fran.co Goya. Esta estampa no llegó a publicarse y es la unica que conozco ("Painting by Don Diego Velázquez de Silva, etched by Don Francisco Goya. This print was never published and is the only one I know of", handwritten in ink on a piece of paper added at the bottom of the image).

Only three copies of this etching exist, one of them made before the aquatint was applied. A single state proof was made prior to the aquatint. It was later retouched in the lower border and the upper right-hand corner.

This work came from the Valentín Carderera Collection.

This is Goya's copy of the painting by Velázquez known as Ochoa, or The Mayor of Ronquillo. Practically nothing is known of this work and we can only base our study of it on a version which previously belonged to the old Casa Torres collection. The male figure wears an extravagant black cape covering his body, whilst his face is framed by a white ruff. In one hand he holds a black hat and in the other some sheets of paper. Tucked under his forearm is a cane.

Goya's working method on this print provides a foretaste of what would later become his style as a printmaker. The lines cover almost the entire surface of the paper, and by varying their concentration Goya is able to create areas of greater or lesser volume. The cape worn by the figure has been constructed using short diagonal lines, whilst the rest of the image uses short horizontal ones. The darkest areas are those in which Goya has traced out an area in order to leave it more exposed to the etching acid, thus creating these deep shadows.

Although it is true that this etching represents a significant step forward in Goya's technical prowess, we can still see some difficulties in the artist's depiction of the character's arms, especially the one holding the hat.