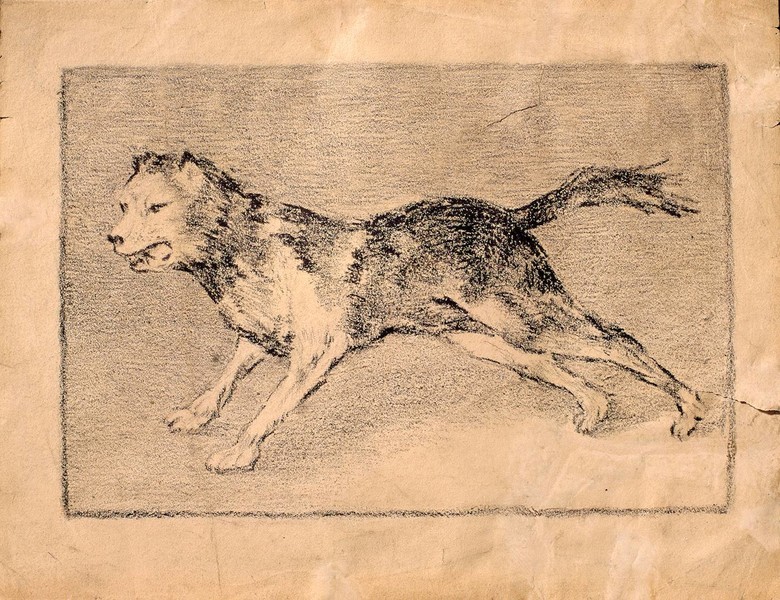 This work belonged to the collection of Rosario Weiss, later passing to her heirs, from whom José Lázaro Galdiano acquired it sometime before 1918.

The print shows a dog, represented full-length and in profile, facing to the viewer's left. The animal is crouching on all fours, as if about to pounce, in front of a neutral background crossed with short horizontal lines. Despite its simplicity, this work has led to some disagreements among the experts. For years it was thought to be a drawing made in lithographic pencil, and it is listed as such in Pierre Gassier's catalogue. Due to its anatomical ambiguity, even the animal represented in the image has been the subject of debate, with some describing it as a dog and others identifying it as a cat. The work's authorship has also been called into question, especially as it came from the collection of Rosario Weiss, opinion being divided regarding this figure's intervention in various drawings that date from the end of Goya's career. For this reason, in Gassier and Wilson's catalogue of 1970 the work was included within a group of drawings attributed to "Goya/Weiss". Up until 2003 it was somewhat ambiguously considered to be "attributed to Goya", although today it is widely accepted that it is an autograph work by Goya.