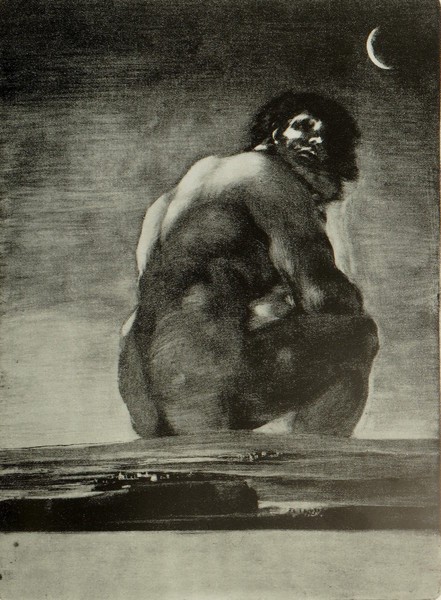 There are six known state proofs for this etching, the second of which displays some additional burnishing.

In 1818, in a letter sent to Valentín Carderera, Mariano Goya spoke of "a giant whose [etching] plate was broken" and which was found that same year amongst other works by Goya in a wardrobe, where they had been hidden away.

His back turned to the viewer, the seated giant is shown resting his arm on one knee. He is turning his bearded face over one shoulder, allowing us to see the melancholy, pensive expression it wears. His half-open mouth and the intensity of his gaze convey a certain sensation of anguish. The only spatial reference in this etching is the moon, in the upper right-hand corner, possibly indicating that the giant is waiting for dawn to arrive.

Although at first it was thought that Goya had created this print using mezzotint, it was later concluded that it had actually been done using burnished aquatint.

This print has obvious ties to the painting The Colossus. Though the postures of the two figures and the context in which they are represented are clearly different, there can be no doubt that they are depictions of the same character, whose interpretation is not without its complications. It has sometimes been thought that this is a reference to Napoleon, though it has also been suggested that the figure in this etching is an allegorical representation of mankind, waiting for a new day to dawn. If we compare the appearance of the figure in the oil painting of The Colossus, in the Prado Museum, and the figure in this print, we might think that Goya has attempted to depict the same character but at two different moments. The giant could be an allegory of Spain itself, rising up against the French in the painting and then, later on, during the reign of Ferdinand VII, looking back with resignation, meditating and questioning the circumstances he finds himself in, without enough strength left to react, weighed down by a strange melancholy. This interpretation does have a certain coherence if we look carefully at the last occasion in which Goya had represented a giant: Great Colossus Asleep. In that image, the head of the giant is shown swarming with tiny people, waving a flag of victory from atop the giant's head. We can, therefore, speak of this giant having three different states, ranging from action to absolute passivity.

Experts have proposed various formal sources of inspiration to which Goya could have turned for the realization of this etching. The one with the greatest number of parallels with The Colossus is Saturn (Metropolitan Museum, New York) by Jacob de Gheyn (Antwerp, 1565-The Hague, 1629). The print shows the colossal figure of Saturn sitting atop a sphere, sleeping with his head resting on one hand and surrounded by the moon and stars. Another possible influence is a print made by the painter Luca Penni, also known as Romanus (Florence, 1500-Paris, 1556), which shows Orion carrying the moon on his back.

Yet another figure reminiscent of that in The Colossus appears in the work by Henry Fuseli (Zurich, 1741-London, 1825) entitled Polyphemus Tricked by Ulysses (1803, private collection, Zurich). In Fuseli's drawing, the pensive expression worn by the very Goya-esque figure of the cyclops is a study in dejection. In both Goya's and Fuseli's visions of a giant we see the intense contrast between immense physical strength and utter spiritual exhaustion.