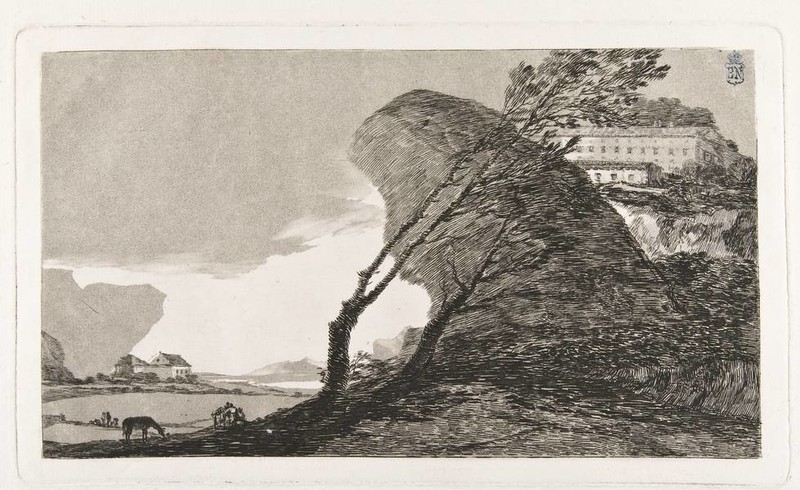 In 1810, Goya divided the copperplate of this work in two to make etchings no. 14, The way is hard!, and no. 15, And it can't be helped of his Disasters of War series.

Very few state proofs for this etching exist. It belonged to the Valentín Caderera Collection until 1867.

The preparatory drawing for this print is in the Prado Museum.

In the foreground, Goya has etched a withered tree, still with some branches at the top, stretching diagonally up and across to the upper right-hand corner of the composition. That side of the print is occupied by a large rock which juts out into the centre and which partially obscures the buildings behind it. Also in the foreground, on the left-hand side, we can see a horse and, nearby, a group of people.

The painter has used aquatint to capture the darkening sky at the very top of the image, within which a brighter section has been left open in the centre. His etching of the rock or mountain shows it as a solid, heavy shape, whilst the buildings at the top of the picture appear lighter and more luminous.

This etching, one of the few landscapes that Goya made during his whole artistic career, displays certain similarities to a painting that has traditionally been attributed to him: City on a Rock. Both works feature the imposing presence of a huge, solid rock. In the painting, it is shown on the right-hand side, and perched on its summit is a man-made structure. These unsettling landscapes are anything but serene. Instead, they are images in which man is dwarfed by the natural world.

This rocky landscape can also be related to some of the locations depicted in Goya's Black Painting.

The plate for this etching has been divided in two. On their reverse we find prints no. 13, Bitter presence and no. 15, And it can’t be helped of the Disasters of War series, conserved in the National Chalcography Museum, Madrid (cat. 170).