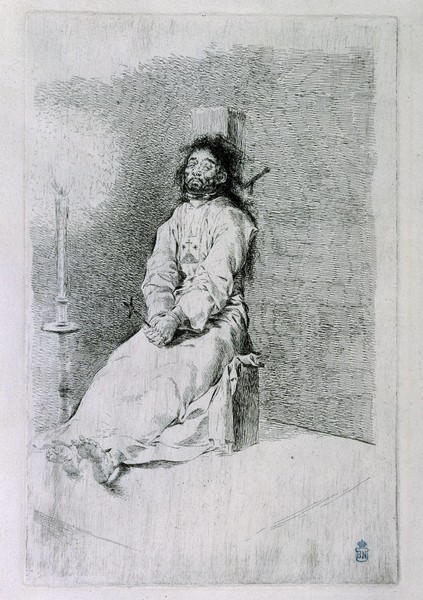 It is thought that Goya made this print to be sold, since there exists a working proof of it - the only known proof of this first state - which was executed before the plate was re-etched and bitten. The metal plate was inked with a blue colour and printed without the copper surface being cleaned beforehand, which is how the print acquired its unusual tinge, reminiscent of religious images published during this same period.

A preparatory drawing for this etching is housed at the British Museum, in London. The etching plate is conserved in the National Chalcography Museum (no. 169), having been acquired in 1792.

In the middle of a space lit by a single tall candlestick and candle we see a prisoner who has just been executed by garrotting. His eyes are closed, and his face bears a grim expression, although he shows little signs of having suffered pain. His long hair falls down his back, his arms are stretched out on his lap, and his clasped hands hold a small cross which is leaning to one side. His legs are also outstretched and the toes on one foot are curled under. Goya has focused most of his attention on the body of the executed man, emphasizing the brutality of the act to which he has been subjected. His bright tunic could be a reference to his innocence.

The way in which the painter uses the etching technique in this image reminds us in several ways of the working method he employs in Saint Isidore the Labourer, as well as in some of the prints in which he makes copies of paintings by Velázquez. He has left an area of white around the candle and on the dead man's tunic, whilst the background has been described using short, tightly-packed and repetitive horizontal lines, which become denser in order to depict the prisoner's hair.

This print represents a scathing criticism of capital punishment, a theme which Goya addressed on numerous occasions. The artist would certainly have been familiar with one particular text on the subject, Dei delitti e delle pene, written by Cesare Beccaria (Milan, 1738- Milan, 1794) between 1763 and 1764. The Milanese writer, who was very familiar with the teachings of John Locke, Montesquieu and Étienne Bonnot de Condillac, criticized the severity and harshness of the punishments doled out to prisoners and called for a policy which instead focused on the prevention of crime. He called for the total abolition of the death penalty which, in his view, failed to dissuade criminal behaviour. Similarly, Goya would also have known of the ideas of Manuel Lardizábal y Uribe (San Juan del Molino, Txacala, 1739- Madrid, 1820), who in 1770 was chosen by Charles III to carry out a reform of the Spanish penal system. His theoretical contributions were decisive but were never realized and, in 1794, Manual Godoy (Badajoz, 1767- Paris, 1851) exiled him to Guipúzcoa, the land of his ancestors.

The Garrotted Man has an important connection with print no. 34, On account of a knife from the Disasters of War series. It is possible that Goya reused the present etching to make that print. The facial expression is similar in the two images, as is the posture of the body and the position of the hands, which in both cases hold a small crucifix. However, Goya includes several details in The Garrotted Man which are absent from the print from the Disasters of War series, where he keeps to the bare essentials in order to ensure that nothing distracts us from the figure of the man who has just been put to death.

The theme of the garrotted man was also depicted by an anonymous artist who, at an unknown date, made a print (National Chalcography Museum, Antonio Correa Collection, Madrid) of the execution of Baltasar Calbo (Xèdica, Alto Palancia, 1750- Valencia, 1808), who was sentenced to death on the 4th July 1808. The National Chalcography Museum has another print showing a condemned man, again part of the Antonio Correa Collection. This anonymous print represents Jacob Johan Anckarström, who, after being flogged, was left on display before the public for three days. His right hand was then chopped off and he was finally executed by beheading on the 27th April 1792.