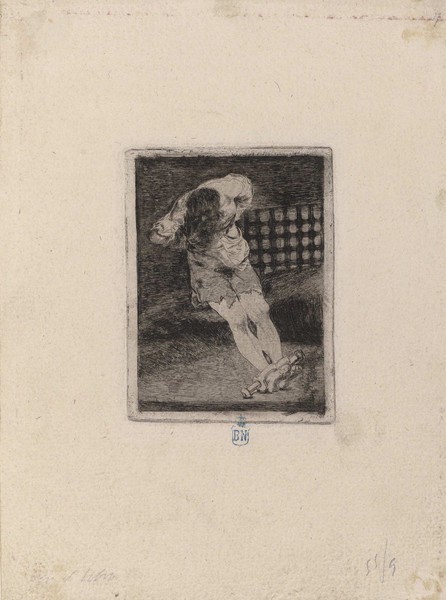 See The Blind Guitarrist and The custody is as barbarous as the crime.

The Museum of Fine Arts, Boston, has a preparatory drawing for this etching.

In this etching we see a prisoner, arranged diagonally in an unnatural, precarious posture. His face is hidden from view since he is looking down at the floor. His feet, held in large shackles, occupy the lower right-hand corner of the composition, whilst his head and his arms, tied behind his back, occupy the upper left-hand corner. The man is only able to rest his heels on the floor, forcing them to take the whole weight of his body. He is dressed in torn, ragged clothes, with most of his legs uncovered. In the background we can make out a barred window, through which only a tiny glimmer of light enters the cell.

Goya has constructed an extremely dark space using very tightly-packed lines, which have been applied diagonally for the floor and horizontally for the background. The light falls mainly on the prisoner's legs and left shoulder, as well as on his clothes, the brightness of which is an allusion to his innocence.

This etching must have been made at the same time as The custody is as barbarous as the crime and If he is guilty, let him die quickly, and can also be related to various prints from the Disasters of War series, in which Goya depicts scenes of prisoners condemned to death, clearly demonstrating his opposition to capital punishment. The title of this work is very clear on this point, with Goya pointing out that it is unnecessary to subject prisoners to such physical torture in order to prevent them from escaping.

The plate for this etching has been lost.