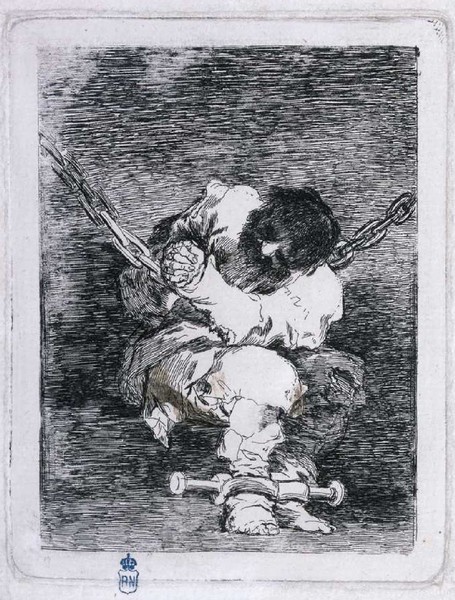 In the first state proof of this print we can see where the burin has been used - on the prisoner's right hip - along with some retouching done in ink.

The preparatory drawing for this etching is in the Prado Museum, Madrid.

A seated prisoner raises his clasped hands, both fastened with chains, in a gesture of supplication. We cannot see his features since his face is hidden beneath his long, dark hair. His feet are fastened in large shackles. Both the chains and the shackles are of considerable size, underlining their importance in any interpretation of the print. In fact, just as the title of the etching shows, the painter is comparing the excessive zeal employed in preventing the prisoner from escaping to the brutality of the crime he is accused of.

It is possible that the way in which the prisoner is secured in this work by Goya was habitual at the time, an idea which is supported by certain passages of Forensic Discourses (Discursos forenses), by Juan Meléndez Valdés (Ribera del Fresno, Badajoz, 1754- Montpellier, 1814), whose portrait Goya painted in 1797. This book, published in Madrid in 1821, speaks of the cumbersome chains and shackles used to hold one María Vicente, put to death on the 23rd April 1798. Goya could well have known of her story: "But it is said that Doña María Vicente must have been treated, as the noblewoman that she is, in a very different manner, and not locked in shackles; and even thus fettered it was the judge's responsibility to examine their state and quality beforehand, to order them put on correctly".

The painter has made extensive use of the etching technique here, building up the background with short, horizontal lines, whilst leaving large areas on the prisoner's clothing untouched and white, underlining his innocence.

This etching would have been made at the same time as two others: The custody of a prisoner does not call for torture and If he is guilty, let him die quickly. In these images, Goya openly expresses his repulsion of the way in which prisoners were treated, as well as his opposition to the death penalty, echoing the ideas of Cesare Beccaria (Milan, 1738- Milan, 1794). In the pages of the work entitled Dei deliti e delle pene, published between 1763 and 1764, the Milanese talks of the need to modify the penal system, to lessen the severity of punishments and to seek out mechanisms for preventing crime. It is possible that these etchings also contributed to the debate on the abolition of torture which was being discussed in the Courts of Cádiz.

Despite the gritty subject matter, the figure depicted in this etching possesses great dignity, recalling some earlier precedents which Goya may have been familiar with. One of these is an anonymous print based on Interior of a Prison (16th century, Museum of Fine Arts, Boston), by Giulio Romano (Rome, 1499-Mantua, 1596). When he was making this print, Goya may also have had in mind the disturbing, gloomy ambience of the prisons of Giambattista Piranesi (Mogliano Veneto, Treviso, 1720- Roma, 1778).

Tomás Harris believes that the plate for this etching may be in a private collection in Paris.