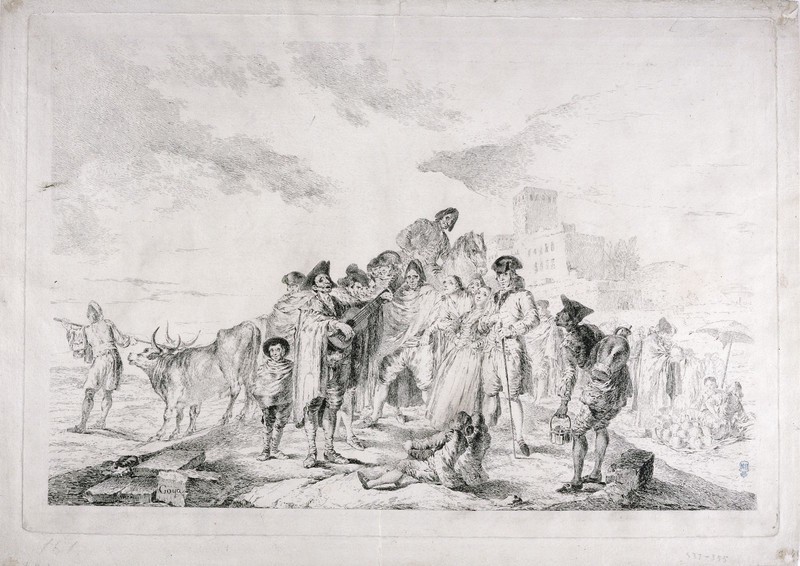 Over the years, Goya made a number of different prints which do not fit easily into any of his series. These are not works that belong to any specific period, but are instead works which he worked on sporadically, sometimes separated from one another by fairly long intervals. In many cases, these prints were executed in parallel to his work on one of his major series. Equally heterogeneous are the topics they address. In some of these assorted prints, Goya even tackles genres which he will barely return to again at any point in his artistic career.

One of the earliest of these assorted prints by Goya may have been The Blind Guitarist, which would have been made at the same time as he was working on his copies of paintings by Velázquez. In it he depicts a costumbrista scene which is repeated in May God repay you, possibly executed prior to the Spanish War of Independence (1808-1814). In a similar vein we find The Blind Singer, possibly corresponding with Goya's stay in Bordeaux (1824-1828). Some of these assorted prints represent landscapes, a subject matter which Goya showed only a very occasional interest in: Landscape with Cliff and Waterfall and Landscape with Cliff, Buildings and Trees. It is possible that the painter was planning to made a whole series of such images, but was interrupted by the urgency of his Disasters of War series, since the two metal plates with the landscapes were reused to make four copperplates for the corresponding prints in the artist's series of images of war.

The War of Independence and the similarity of the subject matter of the Disasters of War series show through in some of these prints, in which the Aragonese artist addresses capital punishment and the treatment received by prisoners in jail: The Garrotted Man, The custody is as barbarous as the crime, The custody of a prisoner does not call for torture and If he is guilty, let him die quickly.

Finally, we come to the etching The Coat of Arms of Jovellanos —used as an ex-libris, or bookplate, for a work by the Asturian ilustrado— and that of The Colossus. This last work would have been made before 1818, and is likely to have served as a preparatory study for the painting of the same name, The Colossus.

The Blind Guitarist came from the Valentín Carderera Collection. Its publication was never announced and only two proofs of this print survive.

No preparatory drawing for this etching is known to exist.

These assorted prints are, from a technical point of view, extremely heterogeneous. In their creation, the painter makes use of both etching and aquatint techniques, with which he experiments and tries out variations of at different times and depending on his current artistic needs. This is why a detailed study of each of the prints and their technical peculiarities is so important.

In The Blind Guitarist, we see an outdoor scene with fourteen people gathered around a blind man who is playing the guitar and singing, as we can tell from his facial expression and his open mouth. Such characters travelled from town to town telling stories, sometimes dramatic in their content, to earn a few coins. The people listening to the show are of mixed ages and social classes. In the foreground, close to the blind man, a water-seller, seen in profile, listens attentively. As do the well-dressed young couple - the woman wearing a spellbound expression on her face - who look like they belong to high society. Next to the singer is a child with an impish look on his face, dressed in a cape, who may be the performer's lazarillo, or guide. Behind him, in the background, a man leads along a pair of oxen, totally indifferent in the show.

This etching, one of Goya's finest, can be related to a tapestry cartoon depicting the same subject which the artist made in 1778 for the antechamber to the bedroom of the Prince and Princess of Asturias in the palace of El Pardo (rec. no.). Goya modified this highly complex cartoon on repeated occasions. The many similarities between the etching and the cartoon lead us to believe that he worked on the two works simultaneously, or that one work led on to the execution of the other. In both works we can see the blind man in the centre, the water-seller off to one side, the well-off couple, the lazarillo, and the male figure at the top, at the apex of the clearly pyramid-shaped composition. However, in the cartoon the landscape is richer and lusher, especially on the right-hand side, whilst in the etching Goya has stuck to just the bare essentials.

The pyramid-shaped composition of this image brings to mind certain prints by Giambattista Tiepolo (Venice, 1696-Madrid, 1770), whilst the characterization of the various figures is reminiscent of some of William Hogarth's (London, 1697-London, 1764) images. In both Goya's work and that of the English painter there is a strong sense of social satire, but conveyed indirectly and with great subtlety.