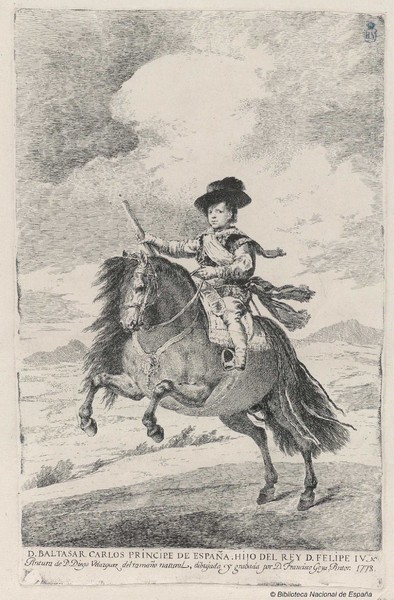 There exist several different editions of this etching. The first was printed in black ink, the second in greyish-sepia ink, and the third in dark greyish-brown ink. Handwritten on this third-edition print, in the lower right-hand corner, we see the word Merelo.

The publication of this etching was announced in the Gazeta de Madrid of the 22nd December 1778.

Prince Balthasar Charles on Horseback, an equestrian portrait of Philip IV's son, was painted by Velázquez for the Hall of Kingdoms at Buen Retiro Palace (1735-1736, Prado Museum, Madrid). The prince, still a child of approximately six years of age when painted, is shown riding his pony, which is rearing up on its hind legs. He is dressed as a general, with a baton in his right hand and the horse's reins in his left. A crimson sash runs across his chest and his hands are clad in suede gloves. On his head he wears a black felt hat.

Goya has copied Velázquez's painting very faithfully, using short, lively lines, and he has even managed to improve upon the horse as depicted in the original. Just like in the other etchings made from Velázquez's paintings, he has noticeably lightened the landscape in the background, and has even made a change to it, showing in the centre a large white cloud that does not exist in the painting. Goya shows his skill in his depiction of the prince's face, from which he has picked out the child's alert, attentive gaze.

The etching was made in two stages. First, the drawing and a light initial bite were made. Later on the plate was coated once more and re-etched in many places, such as on the horse, for example. Some drypoint was added in a semi-circular area at the bottom of the border in an attempt to hide a patch of foul bite.

The etching plate is conserved in the National Chalcography Museum (cat. 161). It came from the Fondo de Recuperación of 1948 (body created to recover works of art taken out of Spain during the Civil War).