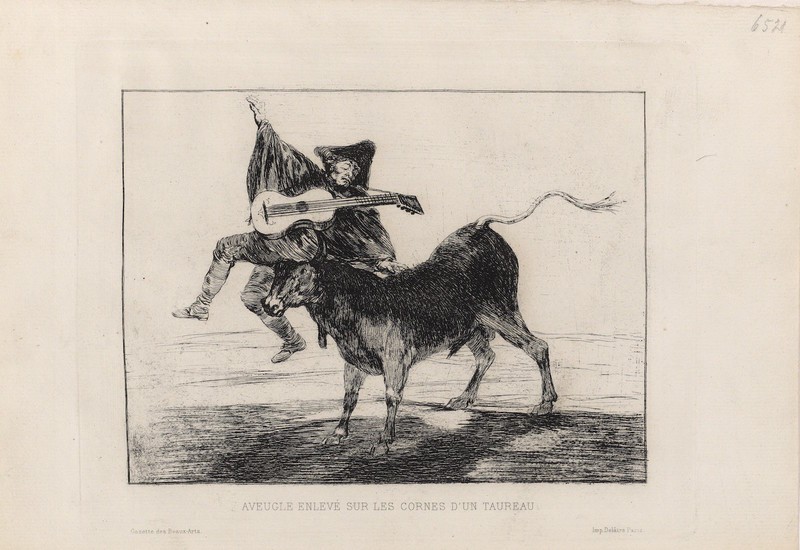 The title of May God repay you comes from the handwritten note made by Goya on the preparatory drawing. The title of Barbarous Entertainment has been taken from the note written on the proof which was included with the first edition copy of the Bullfighting (Tauromaquia) series which belonged to Ceán Bermúdez and which is now in the British Museum, London.

On the reverse of an isolated print of this etching we can see the title written in German, together with its price: DM 50.

In 2008 a print of May God repay you came up for sale at Christie's of London.

There is a preparatory drawing for this etching in the Prado Museum.

This etching shows a bull as it charges at a blind man, dressed in a cape and hat and holding a guitar. There are no spatial references in this image to identify where the scene is taking place.

The blind man bears a striking resemblance to the figure in The Blind Guitarist and is also dressed the same. This may suggest that there could have existed more etchings of this same character, or that perhaps Goya had planned to make more, in order to depict further episodes from the blind man's life. Later, during his stay in Bordeaux, Goya returned to the topic of blindness in the work The Blind Singer.

This etching is thought to have been made prior to 1804, since there already existed a copy in the collection of Giovanni Domenico Tiepolo (Venice, 1727-Venice, 1804) at the time of his death that same year.