Serie
Cardboards for tapestries: Types of Spain (painting, sketches and drawings, 1776-1778). Dining room of the Princes of Asturias, Palacio del Pardo (3b/10) 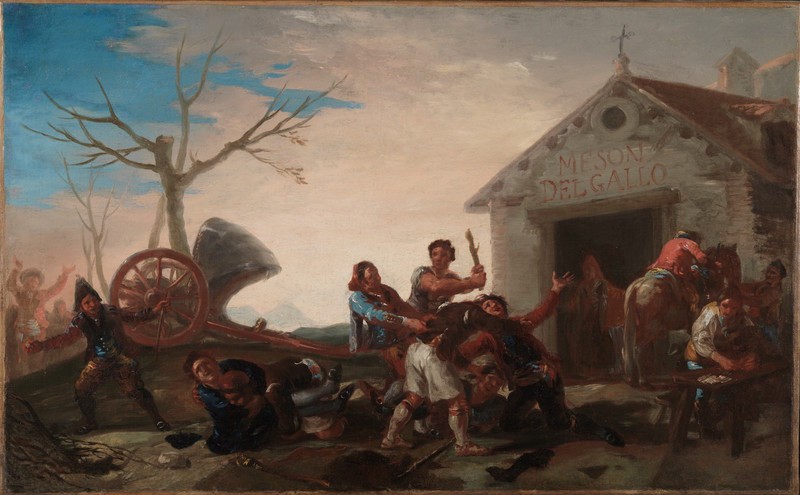 Sketch for the tapestry cartoon Quarrel in the New Tavern.

It belonged to the collection of the French historian Charles Yriarte, of Spanish origin, who acquired it at some point before 1867, the year in which it was reproduced in his work Goya, sa vie, son œuvre. It was sold in Paris at an auction held in the Hotel Droûot, on 26 December 1898, after the death of the owner that same year. The work found its way into the Wertheimer collection in Paris.

It was bought by the National Government on 2002.

Thanks to a document published by Sambricio we know that this sketch, along with three other studies, were referred to by Andrés de la Calleja when justifying the valuation that he gave to the group of cartoons delivered by Goya in August 1777, along with the invoice that the painter presented. The valuer understood that, owing to the size of the canvases and to the fact that they were Goya's own designs, the artist must have dedicated much time to them, and would have made the effort to create sketches and drawings from life, also entailing additional expenses.

The differences with regards the finished cartoon Quarrel in the New Tavern are apparently minimal, although certain modifications can be appreciated.

The fresh, agile brushwork, in keeping with a sketch and perfectly in tune with the violent theme represented here, is lost in the final work. The dimensions change, since whilst in the sketch the figures fight inside a more reduced space, arranged horizontally almost as in a frieze, in the cartoon the scene is extended. The "venta" appears further away than the "mesón" and some dogs have been added to fill in the gaps between the figures. The most important change, however, is the disappearance of the sign that Goya had painted over the door to the inn showing the name of the establishment.

The horizontal, frieze-like arrangement indicates that Goya was able to study some pieces, probably during his trip to Italy. This composition was retained for the cartoon - though with a much tidier, more calculated arrangement - as was the landscape in the background, albeit in a more tranquil and peaceful version.