Serie
Copies of paintings by Velázquez 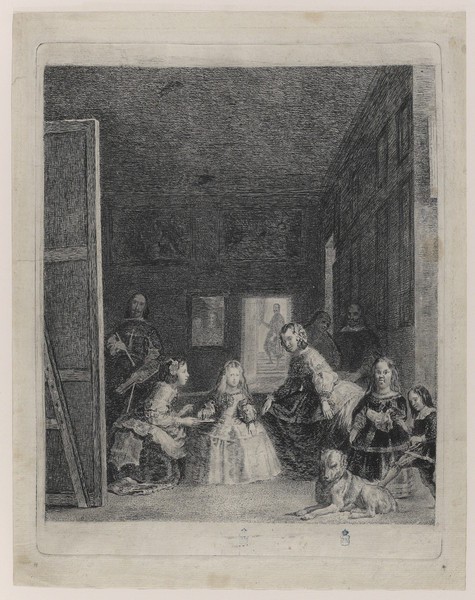 This etching was never published or sold, which is why the proofs which we have from it show no inscriptions on the metal plate.

In the application of the aquatint and the burnishing, the plate (the whereabouts of which are unknown) of this print, the most complicated in the entire series, was spoiled. This is why only a few copies (including at least four state proofs) of it exist, located in the National Museum in Madrid, the Print Archive of the Berlin Museum, the British Museum, London, and the Museum of Fine Arts, Boston. Another copy, printed on both sides in black and red inks, belongs to a private collection in Madrid. Written, by the then owner, on a state proof which belonged to Juan A. Ceán Bermúdez, we see the following: Luca Giordano, when he admired this painting, said to Charles II that it represented the theology of painting [whereas] (I could tell by looking at him) Mengs would become ill-tempered, saying that he was a coward.

The print represents Velázquez's famous work without variations and, despite the difficulties that Goya had in differentiating the ceiling from the walls, he has managed to transmit the necessary sense of depth and to depict all of those elements which appear vague and unclear in the background of the painting. Perhaps the least successful figure is that of Velázquez himself, who practically disappears into the background.

The copy (a second-state proof) in the National Library, which came from the Valentín Carderera bequest of 1880, appears to have been retouched with some smudged black pencil.