The Muslims settled in Spain, ignoring the superstitions of their Alcoran, adopted this hunting and art, and they lanced a bull in the countryside. 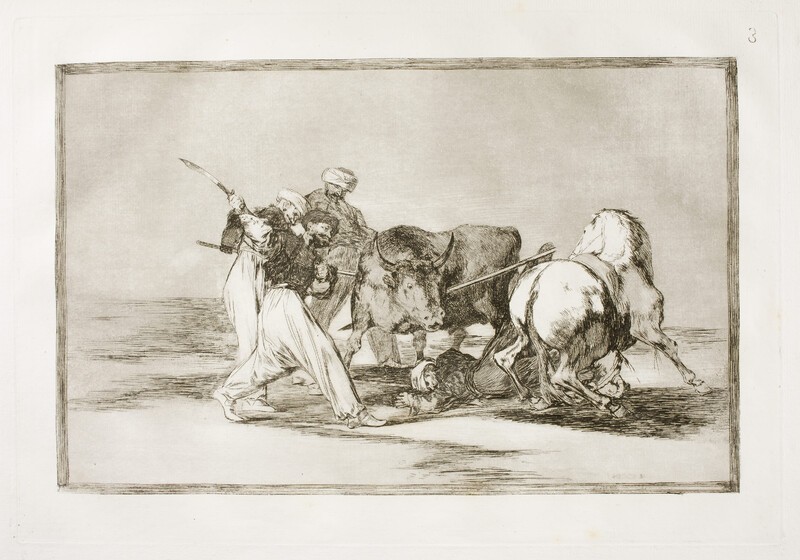 A state proof made before applying the aquatint is preserved, which comes from the Carderera Collection and is currently conserved in the National Library of Madrid.

The plate is preserved in the National Chalcography.

With this print, dedicated like the two previous ones to the wild hunt, begins a subgroup, within the group of "historical" scenes of bullfighting (n. 1-11), of seven engravings dedicated to bullfighting in Spain during the Moorish period (n. 3-8 and 17).

The scene is particularly harsh, as the bull has just dismounted a rider who has thrust a lance through his belly from side to side. The horse, on the right and with its hindquarters, appears to have been torn to pieces, with its intestines falling on the sand. On the other side of the donkey, balancing the composition, three figures on foot wound him with swords. The men are dressed like the Turks or the Mamluks of the Napoleonic army.

The setting is slightly insinuated, without any precise referential element about the place where the events take place.

The preparatory drawing for this print is preserved, also titled The Muslims settled in Spain, ignoring the superstitions of their Alcoran, adopted this hunting and art, and they lanced a bull in the countryside.